Upload your photos for Lassithi Plateu and share them with us!
Press here.

The Lasithi Plateau (Greek: Οροπέδιο Λασιθίου, Oropedio Lasithiou) is high endorheic plateau, and a municipality, located in the Lasithi regional unit in eastern Crete, Greece. The seat of the municipality is the village Tzermiado.[2]
Contents
Geography
The Lasithi Plateau stretches (11 km (6.8 mi) in the E-W direction and 6 km (3.7 mi) in the N-S direction. It is approximately 70 km (43 mi) east from Heraklion and lies at an average altitude of 840 m (2,760 ft). Winters can be harsh and snow on the plain and surrounding mountains can persist until mid-spring. The plateau is famous for its white-sailed windmills, (more accurately, wind-pumps), a local invention that have been used for two centuries to irrigate the land. Despite their vast number (some 10,000) in the past, most of them have been abandoned nowadays in favour of modern diesel and electrical pumps. Because the water table is close to the surface of the ground, all burials in cemeteries are above ground, in a stone mausoleum, or a stone box with decorations. This is because the plateau is endorheic, and there is impermeable rock just below the surface of the ground.
History
Monument commemorating the battle and desctruction of Lassithi by Ottoman and Egyptian forces in May 1867.
The fertile soil of the plateau, due to alluvial run-off from melting snow, has attracted inhabitants since Neolithic times (6000 BC). Minoans and Dorians followed and the plateau has been continuously inhabited since then, except a period that started in 1293 and lasted for over two centuries during the Venetian occupation of Crete. During that time and due to frequent rebellions and strong resistance, villages were demolished, cultivation prohibited, and natives were forced to leave and forbidden to return under a penalty of death. A Venetian manuscript of the thirteenth century describes the troublesome plateau of Lasithi as spina nel cuore (di Venezia) - a thorn in the heart of Venice. Later, in the early 15th century, Venetian rulers allowed refugees from the Greek mainland (eastern Peloponnese) to settle in the plain and cultivate the land again. To ensure good crops, Venetians designed a large system of drainage ditches (linies) that were constructed between 1514 - 1560 and are still in use. The ditches transfer the water to Honos (Greek: Χώνος), a sinkhole in the west edge of the plateau, that feeds the river Aposelemis.
During the Greek War of Independence in January 1823, Hassan Pasha led an army of Ottoman and Egyptian forces sent by Muhammad Ali that seized the plateau killing most residents who had not fled to the mountains. In May 1867 during the great Cretan revolt, Ottoman and Egyptian forces under the command of Pashas Omar and Ismail Selim marched towards the Lasithi plateau. Their aim was to strike a decisive blow on the revolutionaries who used it as their hideout. After fierce fighting, the outnumbered rebels were defeated and forced to retreat to the slopes of Dikti. Between 21 and 29 of May, many village dwellers were slaughtered or taken slaves, their homes were set ablaze after being looted and livestock and crops were destroyed.[4] The monastery of Kroustalenia that was the seat of the revolutionary committee was also demolished.
During the Axis occupation of Greece in 1941–1944, the peaks surrounding the plateau were used as hideouts by local resistance fighters.
Archaeological sites
There are several caves of archaeological interest in the surrounding countryside, of which Diktaion Andron (Greek: Δικταίον Άντρον, also Diktaean / Diktaian Cave) near the village of Psychro (Greek: Ψυχρό) is the birthplace of Zeus according to Greek Mythology. Zeus is also said to have used Diktaion Andron as his hiding place after abducting Europa. The archeological site of Karfi, believed to be the last outpost of the Minoan civilization is located on the mountains immediately north of the plateau. 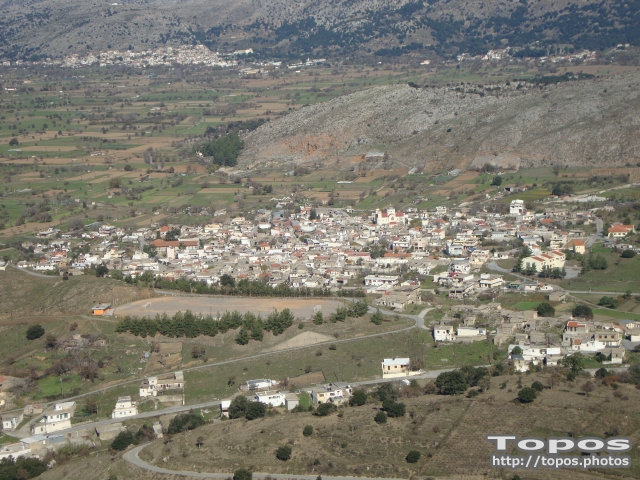 The Cretan Folklore Museum (Agios Georgios, Lassithi Plateau). In the village of Agios Georgios there is a folklore museum containing a large amount of exhibits, which are of cultural interest. The museum is divided into two sections.

The first section is an old house that was built at the beginning of the last century and is a model of the typical local architectural style. The exhibits are placed throughout the house in such a way as to reflect their use, so that the whole space has a functional atmosphere, rather than merely the usual display of exhibits. The parlor, the cellar, the oven, the stable and stalls demonstrates that the style of life which was carried out there two hundred years ago continues on unchanged and comfortably until today. In a separate space there is a collection of equipment and tools used by the craftsmen of the area. In separate places one can find tools of the carpenter, ironmonger, basket- weaver, potter, the coffee-shop proprietor, and the potter.

The second section of the house is a neo-classical Cretan house from the beginning of this century. Screens, hand-carved furniture, hanging lamps, clocks, exquisitely embroidered materials and photographic materials and other exhibits adorn various parts of the home. The upper floor of the house operates as a gallery with paintings and woodcarvings from Crete. In the rear of the house, there are exhibits of intricately woven materials, uniforms, and military memorabilia from the First World War, weapons and historical documents dating from 1912. The generous donations of embroidery and artworks from Mrs. Chisoula Xanthoudidis - Koundourou is acknowledged, together with those of Mrs. Crisoula Xeidianakis.

The Folklore Museum operates in the Istron area and offers a detailed exhibition of life in the past. It was built in 1999 by The Folklore Association.

This museum declares a great love of and attention to the local popular culture. It is an important source of information of folklore and the history of the inhabitants of the Mirambello Gulf. 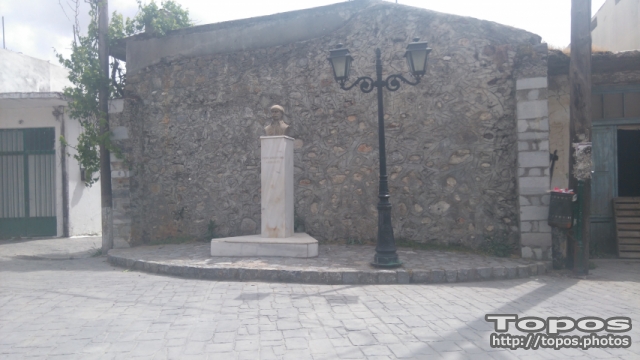