Upload your photos for Andros and share them with us!
Press here.

Andros, the northernmost island in the Cyclades and the second largest in the group, is also among the most beautiful. In the southeast is Andros or Hora, the capital of the island and its second most important harbour. This is a most attractive town, with neo-classical mansions side-by-side with Cycladic houses, steep and narrow alleys lined with arcades, fine churches and two pretty squares in the centre of a town which will make a lasting impression. Among the most important monuments of Hora are the castle, now ruined, and the church of Our Lady'Palatiani' within its walls. On the cultural side, there is an Archaeological Museum , a Museum of Modern Art, and a Nautical Museum with a rich collection of ship models, photographs and ship's instruments. Andros is home to many of Greece's seamen, and interesting cultural events take place there all year round Gavrio is the island's principal harbour, on the west side of Andros. Among the interesting features in the vicinity is the tower of Agios Petros. Andros has numerous interesting things to see: the church of the Archangel at Messaria, the monasteries of Zoodohos Pigi at Batsi, of St Kicholas at Apikia (which is also the site of the Sariza mineral spring), of Our Lady 'Panahrantou' at Falika and the Apano Kastro or "Tis grias to Kastro" (Upper Castle) to the north of the village of Kohilos. Special mention should be made of the ruins of an ancient city, which have survived at Paleopoli. At Zagora, to the south of Paleopoli, one of the most important Geometric temples to have been discovered anywhere in Greece has come to light There are good swimming beaches at Nimborio, Paraporti, Korthi bay near Batsi, Gavrio, Vitali and elsewhere. Andros offers tourist amenities of good standard and can easily deal with the steadily increasing numbers of visitors who choose it for its natural beauties, its attractive villages, its historical monuments, its superb beaches and its medicinal springs. 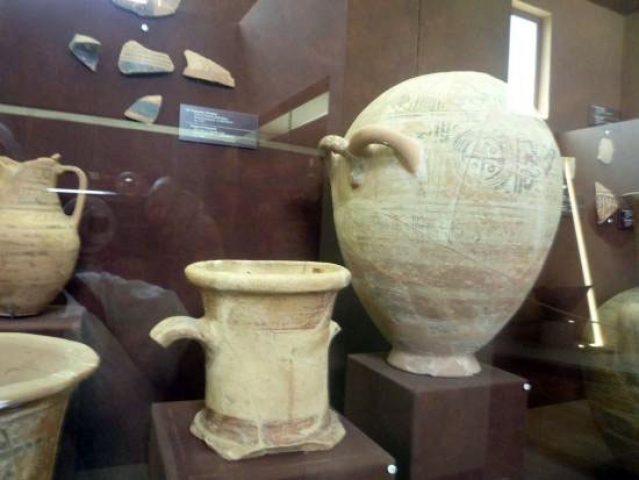 ARCHAEOLOGICAL MUSEUM OF ANDROSarxaiologiko museum
The Archaeological Museum of Andros was designed by architect Stamos Papadakis and built in 1981, following a donation from the Basil and Elise Goulandris Foundation. It has a projection room, while from time to time there are exhibitions of modern art at the atrium, in co-operation with the Museum of Modern Art of Basil and Elise Goulandris Foundation.
The Archaeological Museum exhibits:
-Collection of findings from the Geometric settlement of Zagora.
-Collection of sculptures dating from the Archaic to the Roman times.
-Collection of pre-Byzantine and Byzantine sculptures.
Location: In Chora, at “Theophilos Kairis” square. 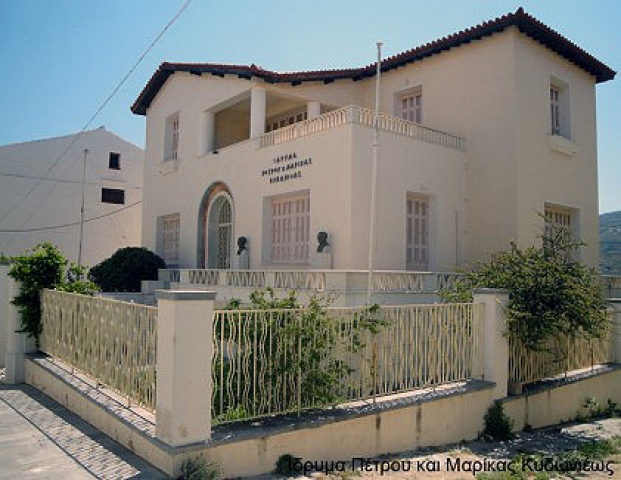 KYDONIEOS FOUNDATION Kydonieos Foundation was founded in 1994 by Petros and Marika Kydonieos. Its main objective is the promotion of cultural events and exhibitions in Andros. The Foundation’s philosophy aims in two directions, the first of which is to culturally educate people of Andros. For this reason, the pottery workshop opens in 1997, while since 1994 the Foundation provides Byzantine music lessons to children and adults and since 1998 instrument lessons (mandolin, guitar, piano) to children aged 7-18. In addition, since 1997, it offers scholarships to the Andros’ high school graduates who succeed in the entrance examinations of the Greek Universities. The second direction concerns the events taking place during summer. Since 1995, the Foundation is organizing a special event called “Ploes” that takes place every summer introducing important painting and sculpture exhibitions of famous artists, such as Tsoklis, Pavlos, Takis, etc.
Location: At the entrance of Chora.
Opening hours
Winter season: Saturday, Sunday, Monday, 10.00 - 14.00
Summer season: Daily (except Tuesday), 10.00 - 14.00 During exhibitions: Monday - Saturday 10.00-13.30 & 18.30 - 21.30 Sunday 10.00 -14.00, Tuesday closed. 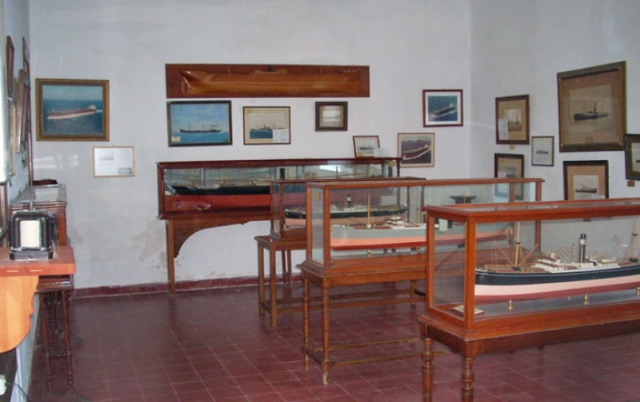 MARITIME MUSEUM OF ANDROS
The museum was founded in 1972 and the most important of its exhibits are the old freight contracts, insurance contracts, various nautical diaries, where the life of the Andriots on the seas before the 1821 War of Independence is described, lithographs of Andriot ships and the later first stream freighters of Greece etc. The Maritime Museum, along with the square of the "Unknown Sailor", were donated by Nikos I. Goulandris family.
Location: At Chora, just before the "Unknown Sailor" square. Opening Hours Summer season: Daily 8:00 - 22:00 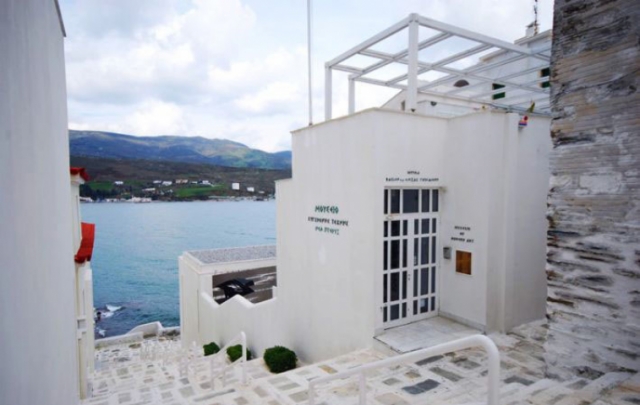 MUSEUM OF CONTEMPORARY ART
It was inaugurated in 1979. The initial reason was to exhibit the collection of works by Andros native sculptor, Michael Tombros. The exhibits were further enriched by part of the personal collection of the two founders, Basil and Elise Goulandris, consisting of more than 300 works of distinguished Greek and foreign artists. This first part of the museum is now the Old Wing and hosts sculptures of Tombros, Zoggolopoulos, Chryssa, Nikolaidis, Takis, etc. From 1983 to 1985, it hosted temporary exhibitions of Greek painters. The increasing attendance and interest on behalf of the public led to the expansion of the museum. Hence, the New Wing, designed by architect Christos Kontovounisios, was inaugurated on July 1986 and situated opposite the Old Wing. The architectural integration of the building with its surroundings received a distinction in an international competition. The New Wing of the Museum houses a library, a museum shop, a projection room and spaces for international exhibitions. The works of significant modern artists, which are exhibited since 1986 until nowadays, are a benchmark in the cultural scene, introducing both the museum and Andros in the Greek cultural map. The museum has hosted, among others, artists such as Paniaras, Picasso, Matisse, Karagatsis, Kandinsky, Bouzianis, Balthus, Galanis, Giacometti, Klee, Chagall, De Chirico, Rodin, Joan Miró, Georges Braque, Nikos Hadjikyriakos-Ghikas, Sophia Vari etc.
Location: In Chora, at “Theophilos Kairis” square.
Opening hours
Winter season: November 1st - March 31st: Saturday, Sunday and Monday 10.00-14.00. April 1st - October 31st: Daily (except Tuesday) 10.00-14.00.
Summer season: July 1st - September 30th: Wednesday - Sunday 11.00 -15.00 & 18.00 - 21.00. Monday: 11.00 - 15.00. Tuesday: Closed. 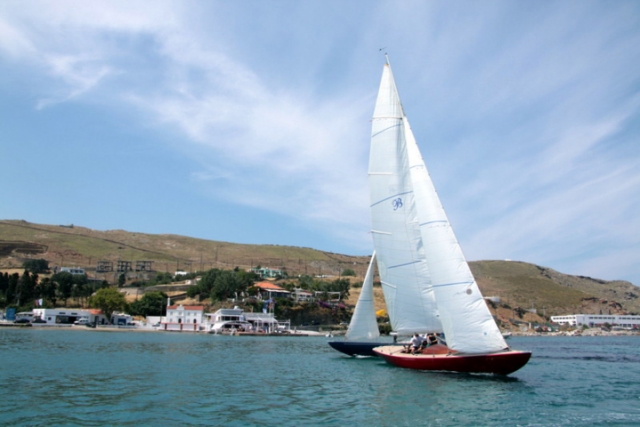 NAUTICAL CLUB OF ANDROS
Nautical Club of Andros was founded in 1957 and has active departments of Open Sea Sailing and Sailing Triangles (Optimist and Laser). It is a member of the Hellenic Sailing Federation. Lots of the Club’s athletes have gone on to excel in top positions at national competitions, with greater example that of the Andriot Nikos Kaklamanakis, gold medalist in the Olympic Games of Atlanta (1996). The next year, he accomplished the crossing of the Aegean, having as starting point the premises of the Nautical Club of Andros. Every year, on early June, the Club hosts the Andros International Yacht Race with great success.

FOLKLORE AND CHRISTIAN ART MUSEUM
It is an old ice factory, which belongs to Mantzavelakis family and was restored and transformed into a folklore museum. The lower level exhibits are from a typical “Andros Home”, while the upper level -used to function as an olive mill- is dedicated to the 18th century Christian art of Andros. During that period, great Andriot painters, whose works are still preserved in various churches of the island, excelled (Theodosios, Nicholaos Mintrinos, D. Bernardis etc.). The area is divided into three sections and aside hagiography, there are references in ecclesiastical silverwork and wood-carved iconostases.
Location: Shortly before entering Chora, just behind hotel "Paradise".
Opening hours Summer season: In July, weekends only (10.00-14.00) and in August, daily (10.00-14.00). 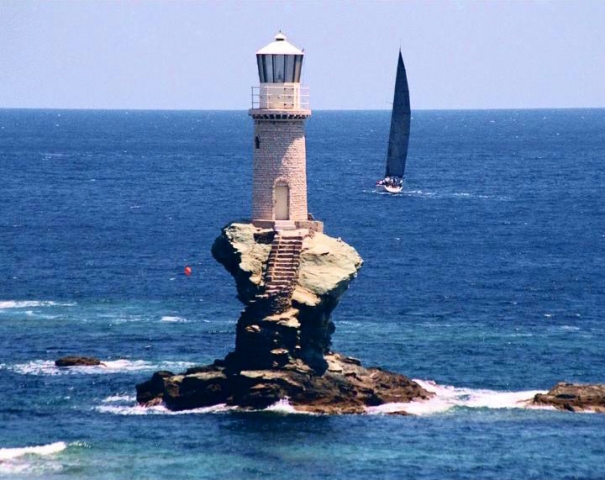 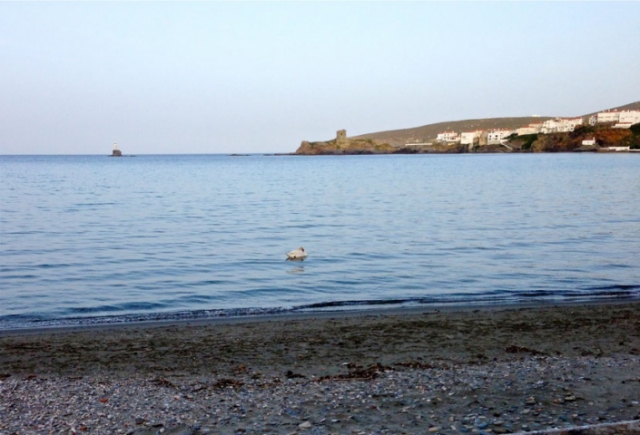 NIBORIO
Location: At Chora. It is the second cove that surrounds the island's capital.
Special features: Beach with shallow waters, ideal for families with young children. Andros Nautical Club is located here. The port gathers many fishing boats and yachts. It is a fully organised beach with sunbeds, showers, changing rooms, taverns, cafes and bars.
How to get there: On foot, from Chora or by car, following the coastal road to Stenies. 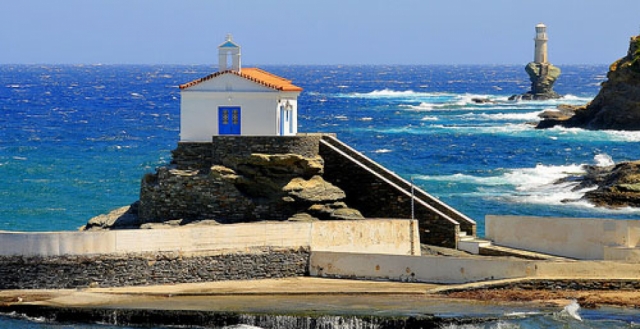 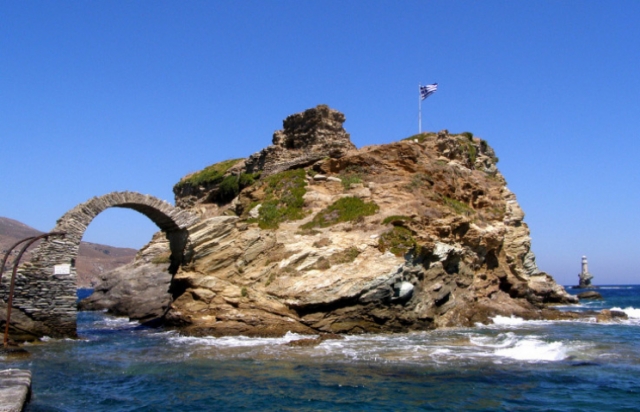 THE CASTLE OF CHORA
It is one of the most important monuments in the capital of Andros. This famous castle was the fortified residence of the Venetian ruler Marino Dandolo, when he conquered the island. It was built in 1207. The towers and barracks of the castle, as well as the Venetian rulers’ coats of arms, were well preserved until 1943, when the ferocious bombing by the Germans destroyed it completely. Nowadays, one can only see its ruins.
Location: At the waterfront of Chora, in the Unknown Sailor square.
How to get there: On foot, from Kairi square. 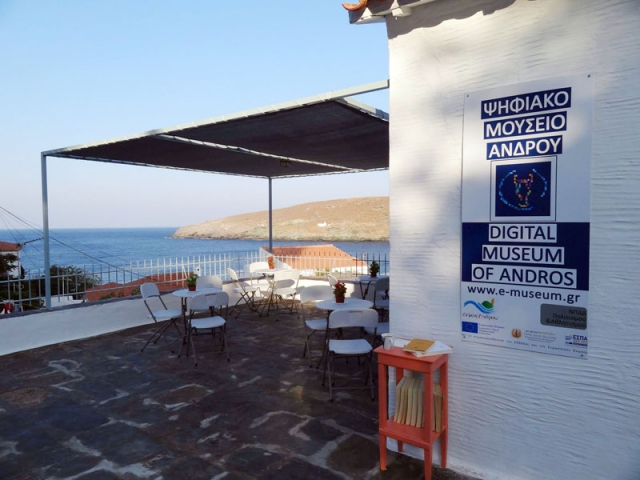 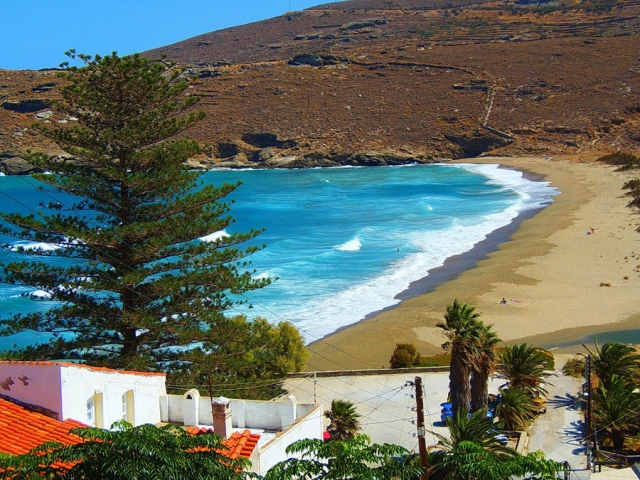 PARAPORTI
Location: On the east side of the island. It is one of the two coves that surround the island's capital, Chora.
Special features: A large beach that is exposed to northern winds, which cause strong undercurrents. There is also a tavern nearby.
How to get there: By car, taking the road from Chora or on foot, from Kairi square. 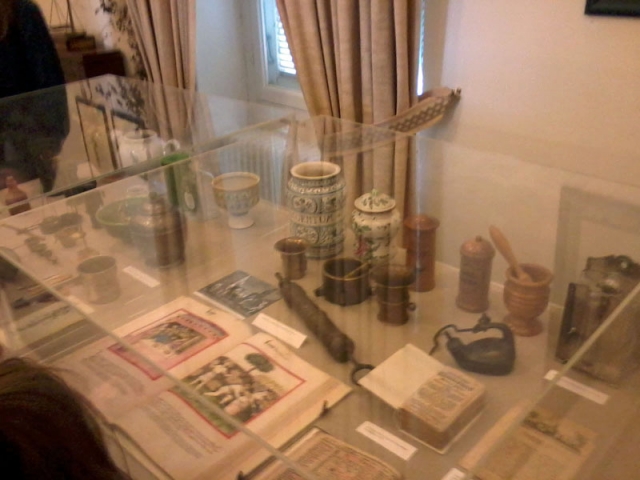 Kairios Library was founded in 1987 as a non-profit private legal entity, thanks to the efforts and persistence of the Andriot historian, Dimitrios I. Polemis. The Library holds around 60,000 volumes of rare publications, manuscripts, and extensive archives referenced to Andros shipping and courts. It also maintains numerous art works, a collection of ancient pots and statuettes, objects of historical value and items of popular culture. There is a book lending service and a children's book department. Kairios Library has established a fully equipped and advanced book binding workshop, offering training seminars and maintenance of old books, documents and folklore objects.
Location: At the entrance of Chora.