Upload your photos for Malia and share them with us!
Press here.

Malia
Night Clubs & Beautiful Beaches
Malia (Greek: MÜëëéá) is a coastal town on the island of Crete, 34km west of Heraklion. It is the seat of the municipality of Malia which also includes the villages Mohos, Krassi and the area of Stalis. The town is a tourist attraction, primarily for its prolific archeological site, the beaches and nightlife. The Minoan town ruins lie 3 km east of the site and cover an area of approximately 1km². The original name for the town is not known.

Here's a place whose reputation goes before it! If you're coming to Crete to party, you've homed-in on the hot-spot. Holidays in Malia have everything going for them. For a start, the beach is one of the best on the island – a sweep of deep-piled sand that stretches for miles. Sunbeds are strategically placed for you to sleep off the last night's excesses, and for those with energy, there are watersports, jet-skis, ringos and pedaloes to play on.
Behind the beach there's a string of bars and snack bars – so you can re-fuel without losing tanning time. And along the 'strip' leading inland you can virtually name your menu – burgers, Mexican, British, Chinese, Indian and the odd Greek eatery. This single road is also the hub of after-dark activity, crammed with bars, pubs and discos that open at dusk and have no plans to close before dawn.
But Malia holidays are much more than their legendary nightlife. The old sector of the village is actually quite charming – retaining a flavour of Greece against all the odds. And there's a huge variety of choice holidays and good deals holidays in Malia – from affordable luxury, to self-catering holidays in stylish little complexes, and great late deals for last minute holidays to Malia.
So if your idea of heaven is full-on, round-the-clock fun, summer holidays to Malia may tick all your boxes. What are you waiting for?

The Minoan Palace
A palace, dating from the Middle Bronze Age, was destroyed by an earthquake during the Late Bronze Age; Knossos and other sites were also destroyed at that time. The palace was later rebuilt toward the end of the Late Bronze Age. Most of the ruins visible today date from this second period of construction. The palace features a giant central courtyard, 48m x 23m in size. On the south side are two sets of steps leading upwards and a maze of tiny rooms. Also here is a strange carved stone called a kernos stone, which looks like a millstone with a cup attached to the side of it. On the north side of the courtyard were storage rooms with giant earthenware pithos jars, up to two metres tall. These were presumably used for holding olive oil and other liquids; the floor of these rooms has a complicated drainage system for carrying away spilled liquids.

The palace of Malia was excavated in 1915 by Hadzidakis, a Greek archaeologist. However, the palace was surrounded by a village which has only recently been uncovered. Excavation is still being carried out here. Most of these new excavations are covered by a giant semi-transparent roof, which protects them from any torrential rain. In places tourists are allowed to wander among the ruins; in others, walkways allow them to walk above them. There are rooms which have been identified as metal workshops, ceramic workshops and meeting rooms. 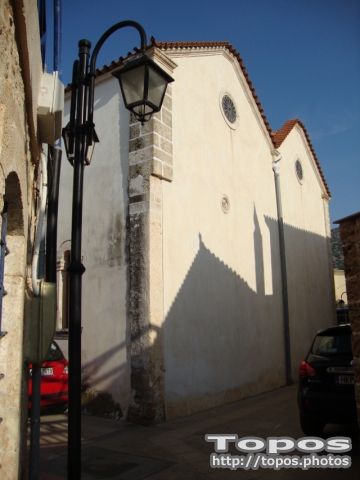 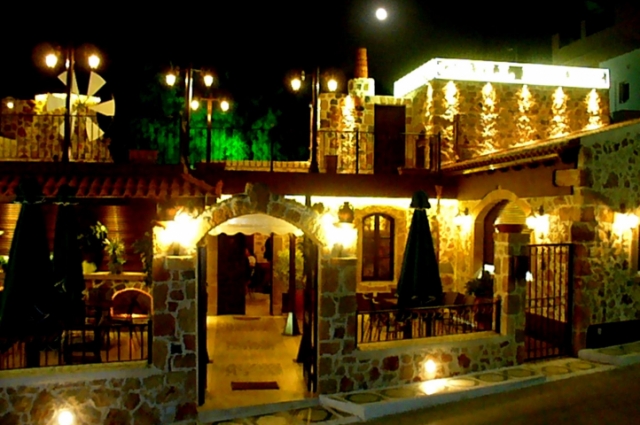 SOPATO is an old house built in 1914, renovated in 2014 to a tavern. It is located at Malia old town, on the road to Krassi Village. 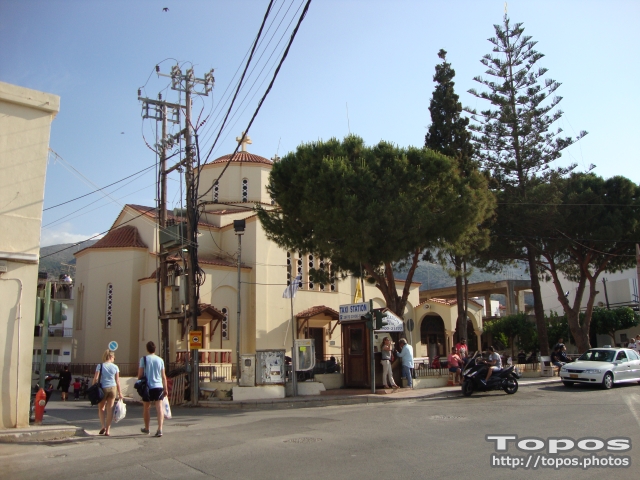 The church of St. Nektarios at Malia is the largest church in the area and is located on the main street of the city.

The impressive frescoes decorating the interior of the church were painted by the icon-painter Michael Vassilakis. 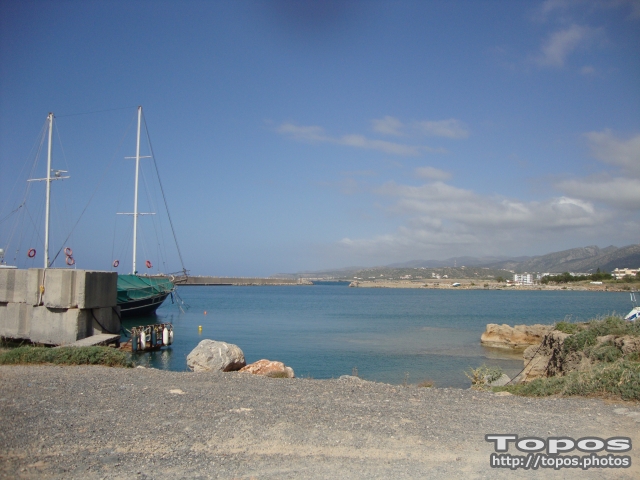 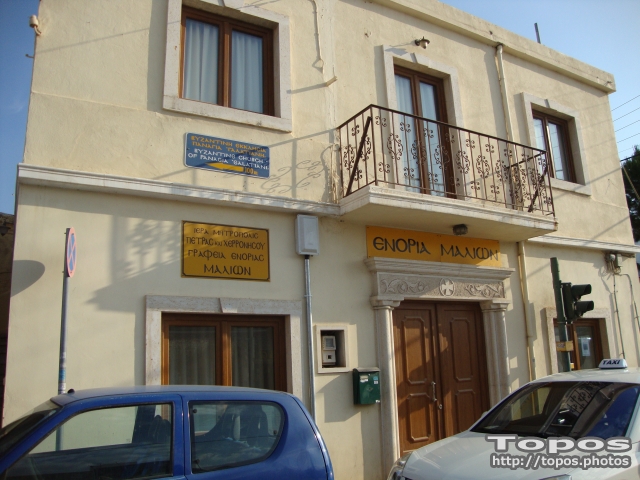 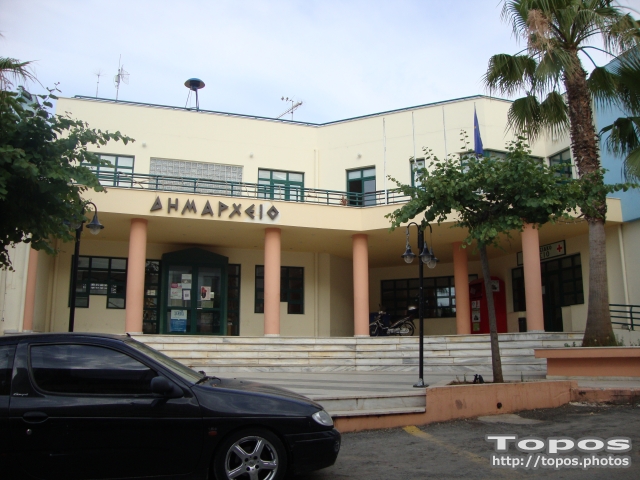 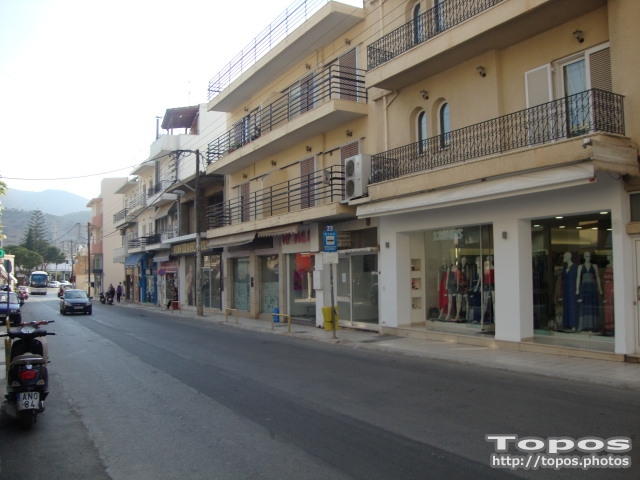 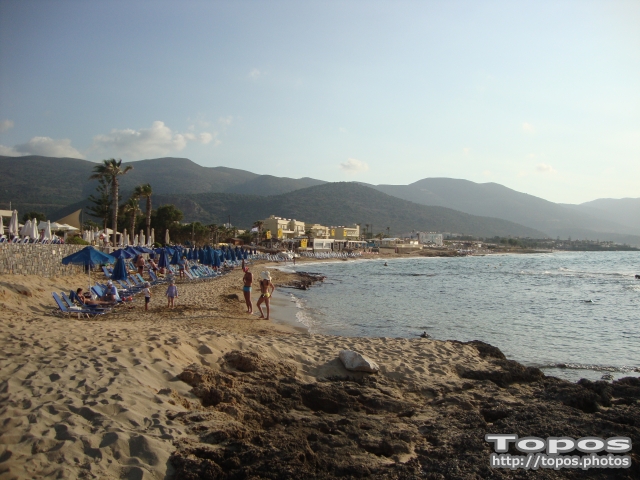 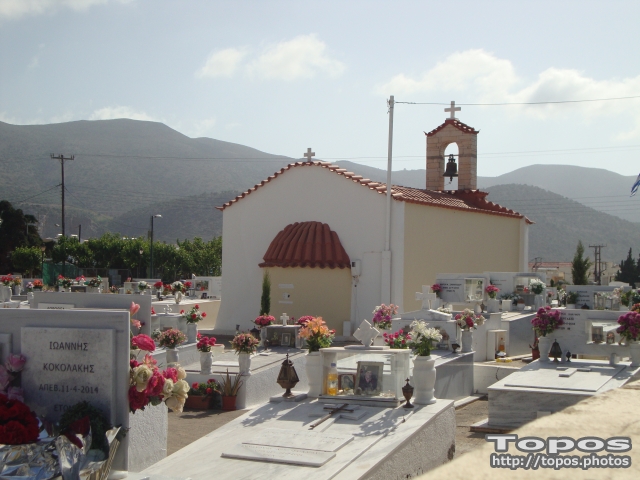 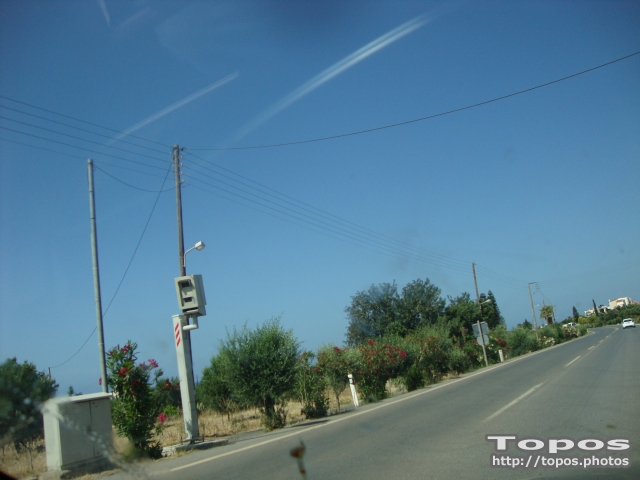 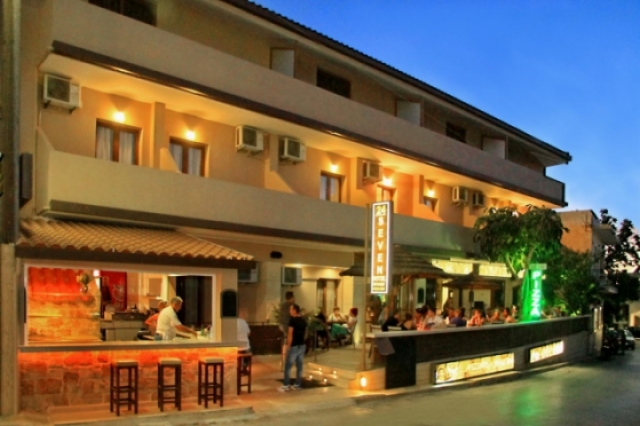 A large new hotel situated in Malia Old Village approximately 5 mins from the main road and 20 mins from the beach.
The whole hotel is decorated to a high standard, the reception, bar and lounge areas are all in different hues of cream which gives it a very sophisticated look. The bar and lounge area is air conditioned and very cool an ideal place to relax away from the sun or in the evenings.
There are large patio doors leading out to the back terrace and pool and also onto the front terrace. Within the bar and lounge area a section has been set aside with four internet access points, there is also 3 large screen TV’s and a pool table.  (The bar is open 24 hours a day)
The front terrace has lots of tables, chairs and large straw umbrellas which give shade in the heat of the day.  Relax here and watch the world go by whilst having a drink and some food.  Food is available from the bar.
The back terrace also has tables, chairs and large straw umbrellas and is surrounded by beautiful plants; a haven from the heat of the day, and a relaxing place to sit in the evenings. There is also a pizza oven and a BBQ area.
A step down from the terrace area brings you to the Pool which has large trees and bougainvillea climbing the walls of the studio building to enhance the area.  This area is in the centre of the complex and is a suntrap, the pool is surrounded by sun beds for you to relax and enjoy the water. (The pool is open from 9am until 8pm)
The studio apartments are in separate buildings around the pool area, all with balconies either over looking the pool or the mountains.  All the studios are self contained with 2 beds, ensuite shower room and toilet, cooking facilities, fridge and air conditioning.
>> More info...
Image Coming Soon
Hermes Rent a Car 439 hits 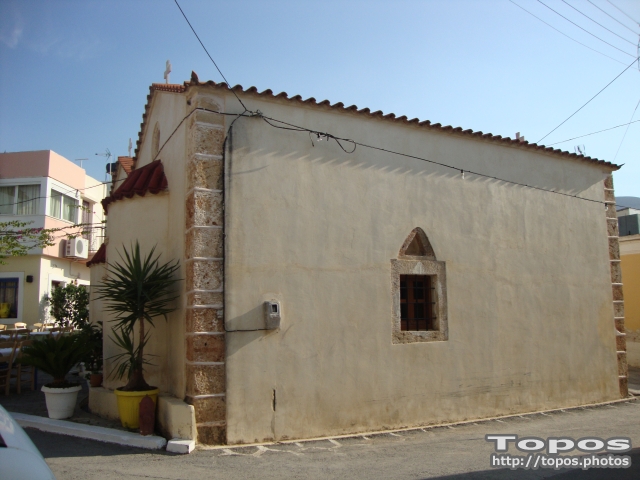 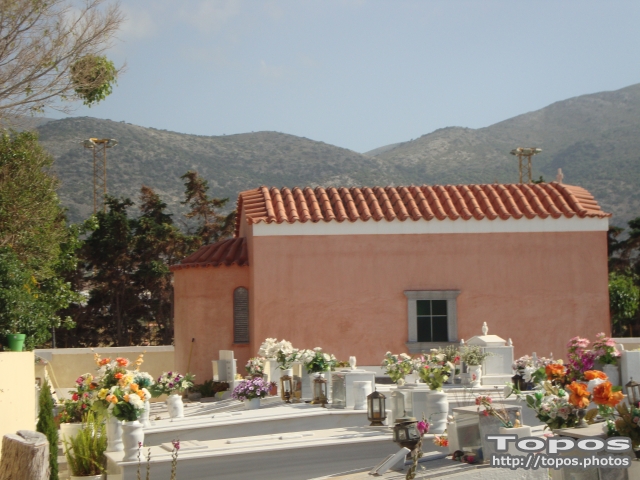