Upload your photos for St Pauls Bay and share them with us!
Press here.


Just south of Lindos, over the headland from the castle is the tiny sheltered ST PAUL'S BAY which used to offer some respite from the hordes but which is now bedecked with sun beds and caravan cafes as the locals cash in on every nook and cranny. St Paul's bay has only a narrow crescent of sand and the beach is usually buried beneath a forest of sun loungers in the high summer. It is also a regular stop on the tourist boat circuit and a favourite for overseas weddings such is the dramatic setting in a bay almost totally enclosed by a circle of rocks. The saint was supposed to have landed here once - hence the name and the small chapel dedicated to him. 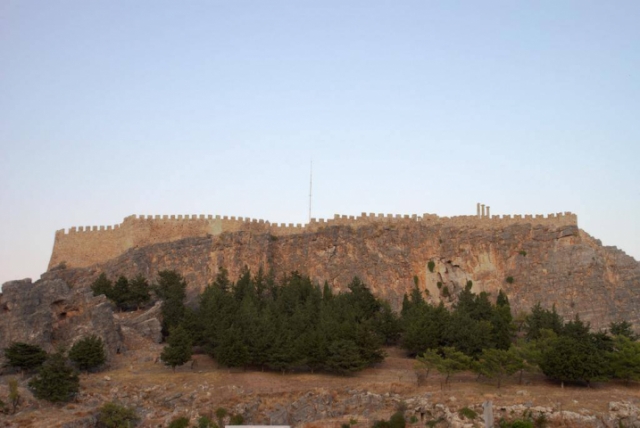 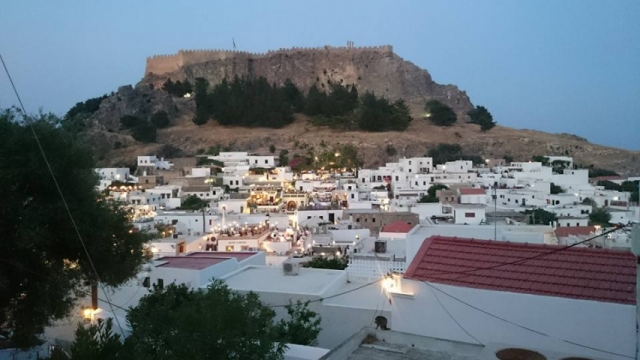 Lawrence Durrel once described Lindos 'as of a scrupulous Aegean order, and perfect of its kind'. Well Lawrence, it is nothing like that now. It has inherited the perfect setting - a shimmering violet and emerald pool in a horseshoe bay of golden sand and sheltered by comforting hills dotted with white, sugar-cube houses. But we are now describing a 'perfect hell of its kind' as package tourists turn up daily in sandstorm proportions. Lindos beach is quickly filled by local holidaymakers, then the cars and bikes roar in followed by tour buses, then the tourist boats. Before long the only distinction between the beach and a Tokyo subway is the baking sun beating down on your head. In July and August, the packed amphitheatre bay turns terribly hot and airless and temperatures can soar to 120F. A friend once passed out in the heat at 10.30pm! Popularity brings high prices and you will pay more for a sun bed here than anywhere in the islands - if you can find one that is. Lindos beach sand is very fine and the bay waters shallow and well protected so, apart from the crowds, this is an ideal family beach. The paths from beach to village however are exceedingly steep, as is most of the town, and it can be a heavy slog home after a heat-soaked day on the packed sands. In 1994 Lindos was accused of flying the EU Blue flag fraudulently after tests found the sea heavily contaminated with bacteria from human sewage. The town subsequently got an Euro grant to replace its obsolete sewer system and now the water is much cleaner.
Sugar-cubed houses clustered beneath above a horseshoe bay make Lindos one of the most photogenic of resorts. The narrow, cobbled streets are pedestrian only and many houses boast beautifully laid out black and white pebble courtyards. The two big problems are noise and crowds. Buses park bumper to bumper in the tiny square at the foot of the steep hill. Waves of day trippers press through the tiny streets which are simply unable to cope. And just as you think the town can take no more the excursion boats come hooting into the bay full of trippers eager to pant up the hill to the acropolis of Lindos.
This beautiful place is so packed you must queue just to pass along the narrow, pebble-paved, serpentine streets. Tourist shops and bars hem in the crowds with a tone that is ruthlessly and relentlessly mercenary. Mercifully, high rise hotels have been banned inside the town limits and discos are confined to the outskirts. But the bars still blare out ear-blasting noise all day, even when they are deserted.
The crowds are bussed in, shipped in and herded in with a relentless frequency . Lindos main attraction is the ancient acropolis enclosed by the walls of a Crusader fortress which is impressive when the visitor swarms have left but a dire experience when surrounded by camera wielding storm troopers. A temple to Athena has capped the outcrop above Lindos since nth century BC. Fortification by the Knights of St John make for a blend of ancient and medieval with. Italian restoration work and Greek cement completing the modern mix. Lindos is noted for it rooftop restaurants which can be found all over the town. Romantic they may be but they generally excel at offering less for more. The food is mediocre at best and the vegetables almost invariably tinned.
>> More info... 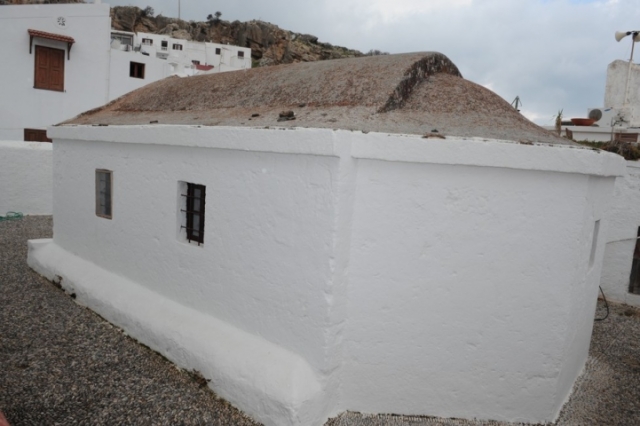 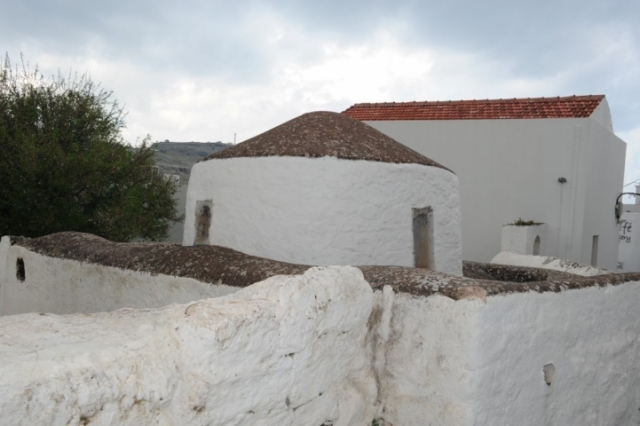 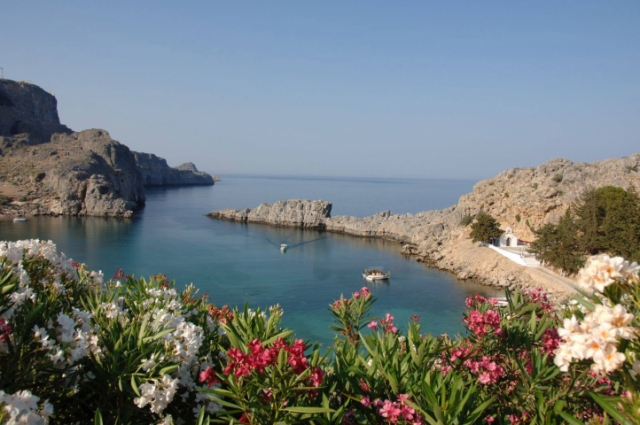 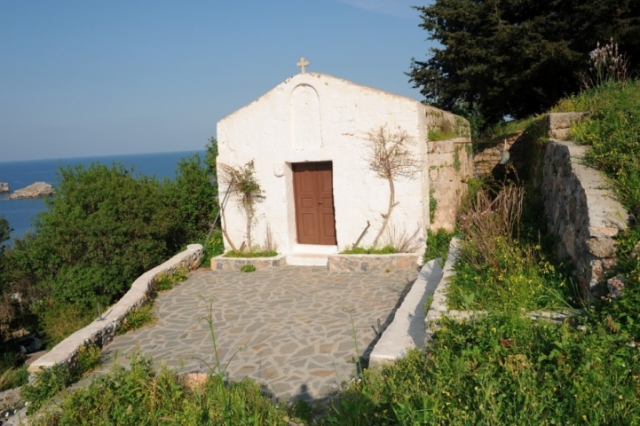 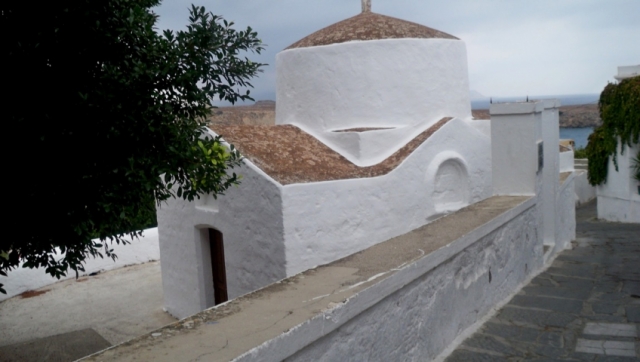 Ayios Georgios Pachymachiotis, one of four Byzantine churches with wall-painted decoration at Lindos on Rhodes, is built in the single-aisled cross-in-square type with dome, which is found in five more churches on the island, out of a total of about one hundred Byzantine churches. Although little is preserved of the wall-paintings of the church, it is enough for them to be described as being of high quality. Their place in the history of Rhodes, and of Late Byzantine painting in general, is made even more important by the fact that they are securely dated by a founder's inscription to 1394/5, when Antony IV (1389-1390, 1391-1397) was patriarch of Constantinople. The donors were the priest Katasambas, a name unknown in the Dodecanese, and his wife kyra Kali i magistrìssa, who is the only one called 'founder'. The founder's inscription belongs to the small group of similar inscriptions referring to the patriarch of Constantinople, and at a period when the area in question was under foreign occupation - that of the Knights of St John in the case of Rhodes. 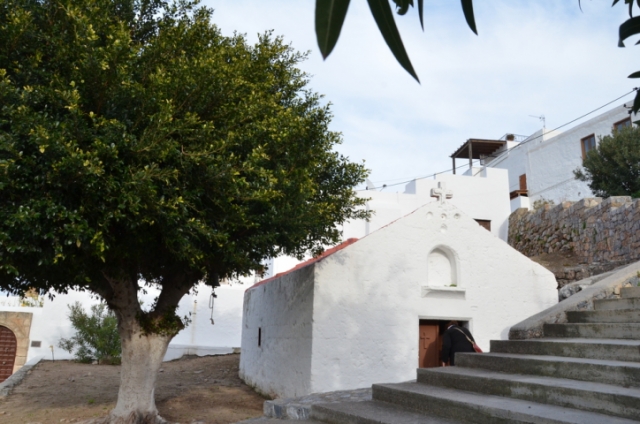