Upload your photos for Sitia and share them with us!
Press here.

Sitia Town, East Crete. Sitia, 18 km from Palekastro and 60 from Ierapetra, with a population of 9500 people, is the easternmost city on Crete and perhaps the least developed.

Even during the busy summer peak, Sitia retains a certain charm and laid-back style.

It has been inhabited since the Minoan period. At Petra, to the east of the town, a section of ancient settlement has been excavated. There is a waterfront with restaurants and cafes, a large public beach, and an archaeological museum which holds many of the findings from Palekastro.

Sitia is the seat of administrative and public services for the county and has road and sea connections with various places in the island and with Pireaus and other Aegean islands. There is also a small airport with connection to Athens, Kassos, Karpathos, Rhodes. During the Venetian occupation the town of Sitia was destroyed three times. 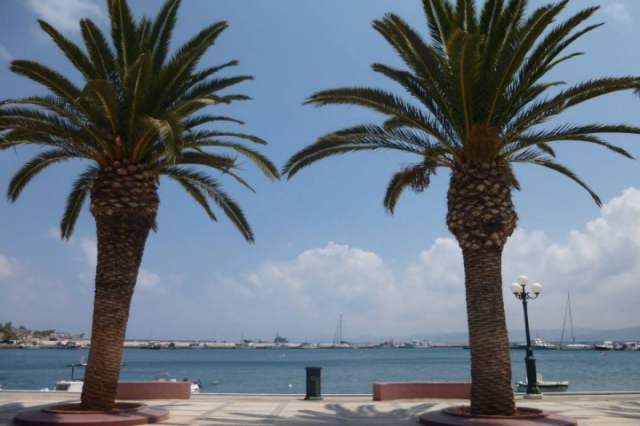 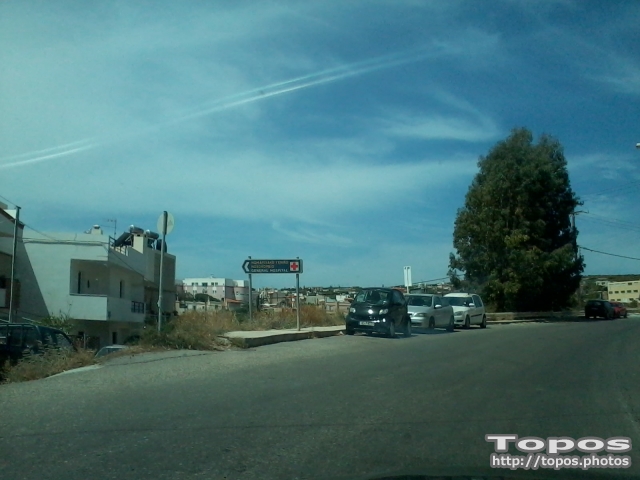 On a low hill (h. 40 m.) by the sea lies an important Minoan settlement. It had a large harbour and was the centre of an area bordered by Chamaizi on the west, Praisos on the south, and Analoukas on the east. Despite the evidence for habitation in the last phase of the Neolithic period (3500 BC), the first settlement is dated to the Early Minoan II period (2600-2300 BC). It continued to be inhabited until 1450 BC, when it was destroyed, along with the other Minoan centres. A short reoccupation occurred during the Late Minoan III period (1400-1300 BC). The settlement flourished in the Old Palace period (2000-1700 BC), when the central building of palatial character was built on the top of the hill; it reached a peak, however, in the New Palace period (1700-1450 BC) when many alterations of the buildings took place. In the 12th-13th centuries AD the top of the hill was occupied by a cemetery, of which 32 graves have been excavated.
In 1900, R.C. Bosanquet conducted a short-lasting excavation in the area where ruins of ancient walls were visible. Systematic excavations have been conducted by M. Tsipopoluou since 1985.
The most important monuments of the site are:
The town. It occupied the whole of the hill and extended around a central building. A "cyclopean" wall with three towers (5 x 5 m.) was uncovered at the foot of the hill. The houses were free-standing, built on terraces, and access to them was gained through stone paved streets, one of which led straight to the central building. The houses contained storerooms and workshops on the ground floor, while the upper floor consisted of the actual living quarters.
Two houses completely uncovered date to the New Palace period (1700-1450 BC). One was abandoned during the Late Minoan Ia period (1500 BC) and the other was destroyed by fire a little later (1450 BC).
•House 1. The rooms of the ground floor extend on two terraces which are connected by means of a stone-built staircase. On the lower terrace are preserved two storerooms and two kitchens, where vases had fallen down from shelves on the walls, and a room with a "lenos" (wine-press) and pithoi for the storing of wine. On the upper terrace is a workshop with stone basins and stone querns, while under the floor was a pithos containing the burial of an infant.
•House 2. Two building phases are distinguished: during the first, one of the rooms of the ground floor was used as a reception hall, with a central column, floor covered with plaster, a hearth, and doorways to the rest of the rooms; later, this was converted into a workshop area, for working and dying wool. To this conclusion point also the stone basins, the channels and the loom-weights found. A lump of clay with signs of the Linear A script which stand for "perfume oil" was found in one of the storerooms.
The central palatial building covers an area of 0.3 hectares. It is constructed on two terraces, on an artificial plateau on the hilltop and is surrounded by a retaining wall with a tower-like bastion. A corridor oriented E-W leads through a pier-and-door partition to the central court, which had a floor covered with plaster, and measured 9 x 13 in the first New Palace period. During the last phase it was enlarged (5.50 x 11 m.) and was flanked by rooms on the west, which probably served as cult places, as indicated by a libation table and tablets of Linear A script found there. The most remarkable of the rooms to the south of the corridor is the one with the gypsum slabs and a bench covered with plaster and orthostats. On the north side of the corridor lie twelve oblong rooms, while at a lower level are the magazines, connected to the central court by means of a monumental staircase, covered with plaster; in the last phase of the building this was also closed by a storeroom. To the west of the building was a garden which separated the main part of the building from the workshop areas.
http://petras-excavations.gr
>> More info... 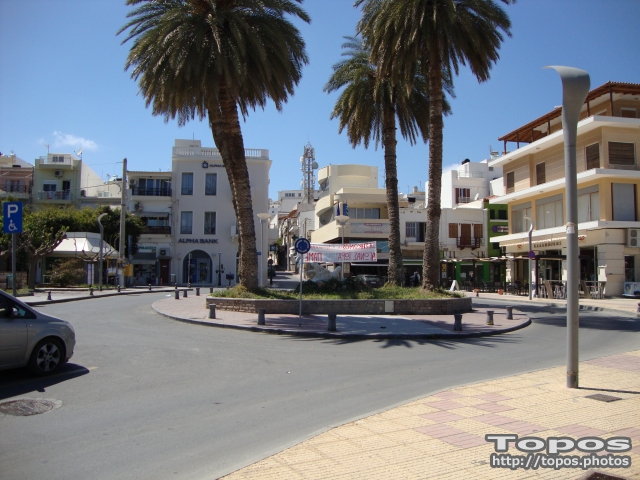 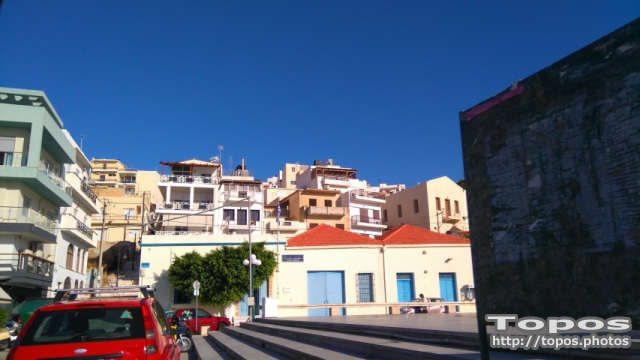 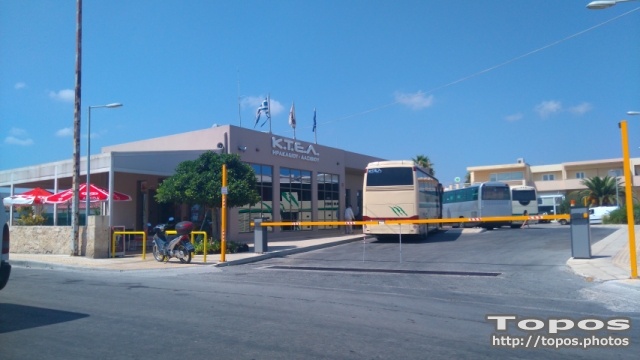 Sitia Airport (IATA: JSH, ICAO: LGST) is a small community airport in the region Mponta of Sitia Municipality, on the eastern part of Crete in Greece. The facility is serving the city of Sitia. The airport is located 1 km north/northwest of the city center. 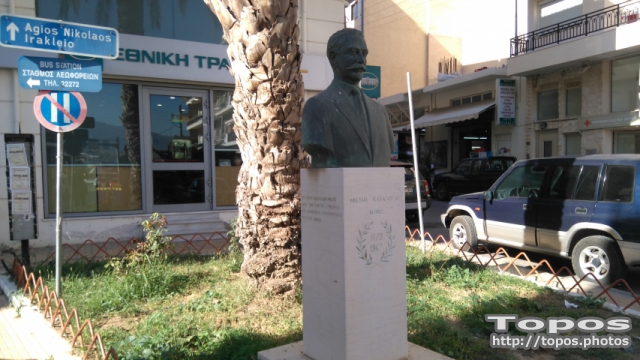 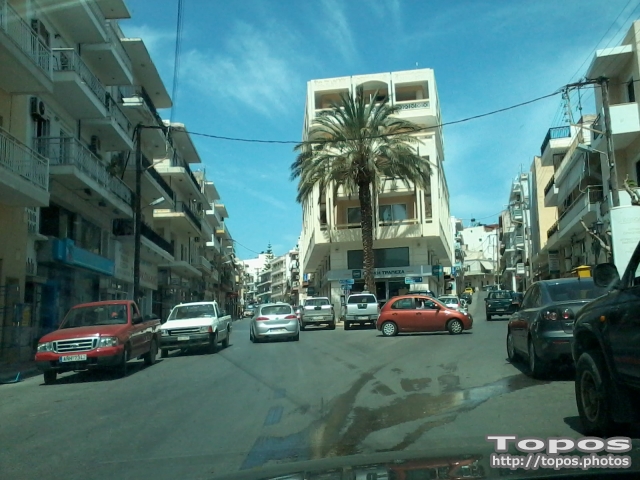 Are situated in the dorp of Petras (1.2 kilometres from the picturesque town of Sitia in the prefecture of Lassithi-Crete), very close to the remnants of the former Minoan settlement Petras, which is said to have been the summer resort for the ancient king and his court. 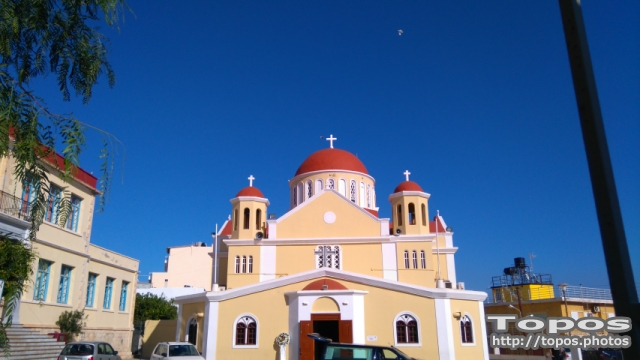 “Da Giorgio” embarks on journeys of savour. Standing at the edge of the harbor of Sitia overlooking the deep blue and exhilarating the visitor with the smells of the kitchen, invites you on a flavourful trip ... just like the old times ....

This is a restaurant that combines luxury and modern amenities with friendly atmosphere; an ambience where the Cretan tradition is our first priority.

You will be highly rewarded with the authentic Cretan cuisine cooked with passion and special care.

It is located just a few meters from the sea and the famous Sitia beach. The interior is lined with stone and traditional décor. With attentive personal work, our restaurant is configured to create a unique climate in which you can enjoy with your friends any meal.Our cuisine is relies on the Cretan Diet which is recognized and famous around the world. Our dietary philosophy dictates that we use only pure, local ingredients in our dishes and cook them with due respect for tradition and hygiene. Special emphasis is given on the experience of taste and the variety of healthy dishes. With this in mind we have organized menus for lunch (noon) and dinner (evening). The dishes served differ from day to day and are so tasty that can satisfy even the most demanding palates. Our traditional deserts and pies are an integral part of all our menus. You will love them.We undertake baptisms feasts, weddings, gatherings, children’s parties and any other events hall for 100 people and outdoor seating for up to 200 people.After your meal, the store offers local raki or raki, traditional sweets and also tiramisu or fruits.

The restaurant is located next to the picturesque harbor of Sitia and 150 m far from the well-known Sitia Beach.  Sitting outside offer panoramic views to the Sea and to the east Crete mountains. Inside the building the traditional decor includes stones and wood. Our restaurant is designed and laid out to create a unique atmosphere where you and your company can enjoy your meals.Many of the products and ingredients we use are pure, locally, our production-cultured as olive oil, vegetables, chickens, rabbits, eggs etc. ..

All the dishes are cooked in extra virgin olive oil which adds to them a special flavour.

The newly built Hotel FLISVOS is located by the most beautiful part of the beach next to the sea and just 50m from the town center. 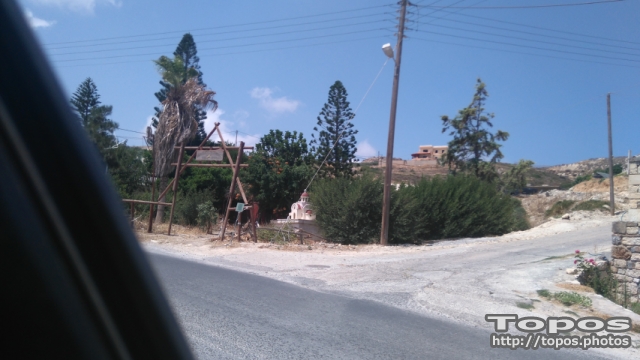 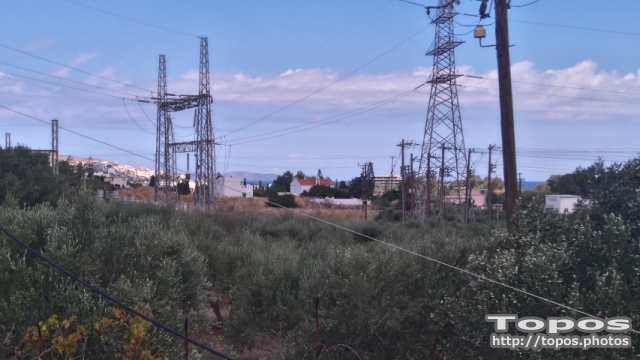 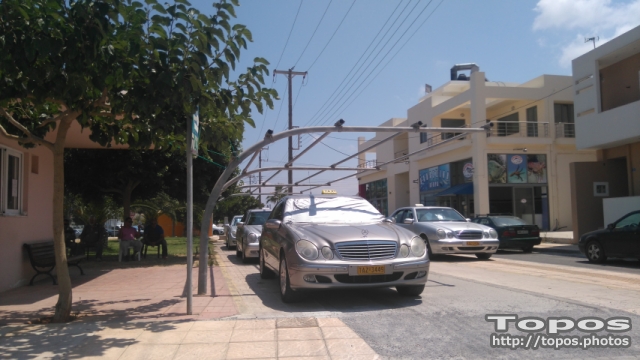 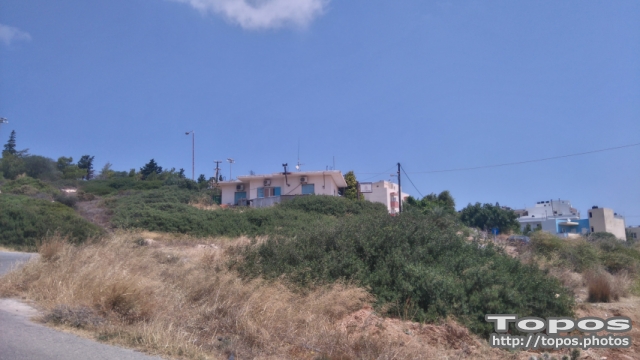 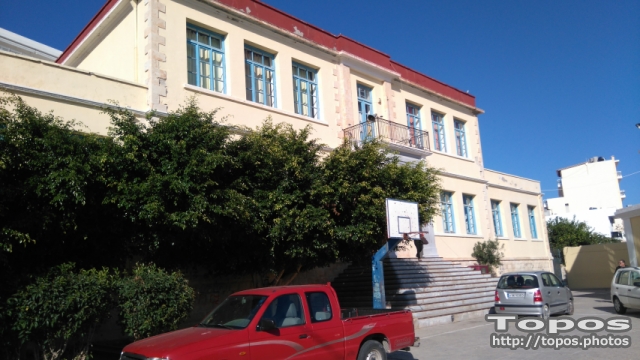 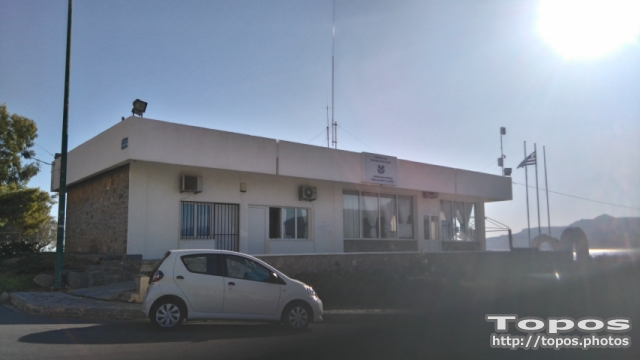 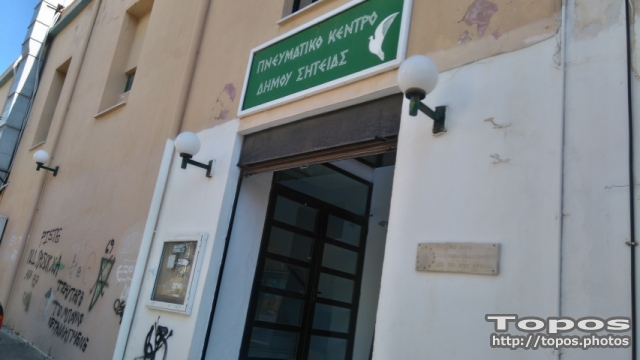 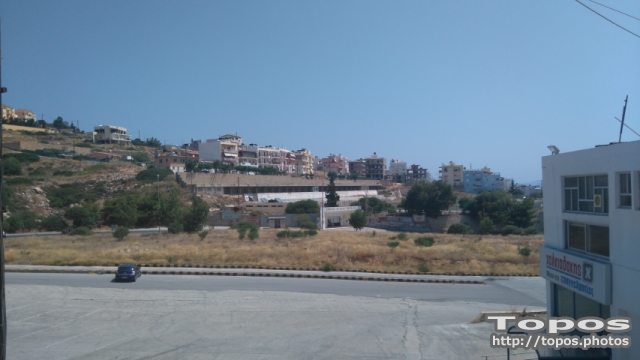 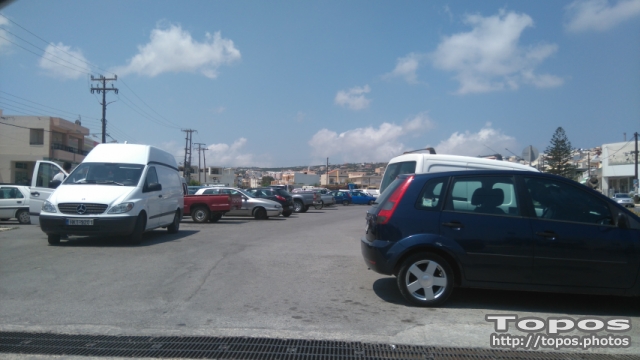 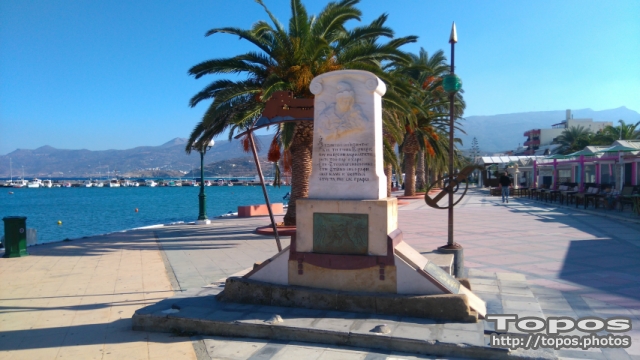 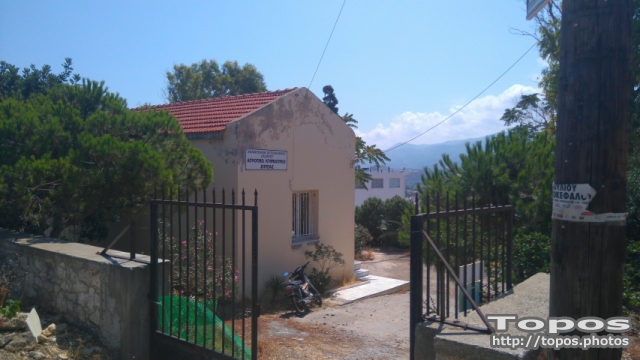 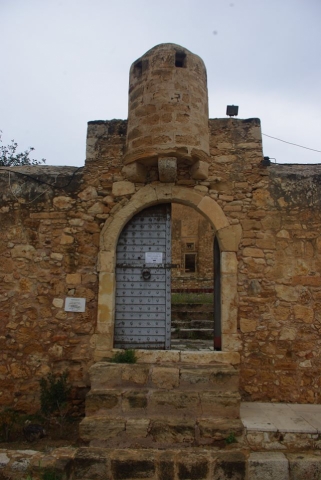 The castle fortress known today as "Kazarma" (Casa di arma), is the most imposing historical monument in Sitia town, East Crete. The Kazarma used to be a military and administrative centre which consisted of a Medieval dwelling surrounded by walls. The fortification of the town and of the Kazarma can be dated to the late Byzantine period. However, pirate raids, the continual uprisings against the Venetian occupation by the local people and the great earthquake all led to the partial destruction of the fortifications until the Venetians themselves were forced to completely destroy them with the intention of rebuilding them. This never happened and in 1651 the town was razed and then occupied by the Turks.

During the Turkish occupation it would appear that the walls were never rebuilt but the Kazarma was restored and evidence of the Turkish extensions can be seen today, for example in the cupolas ("koubedes") on the battlements that form the watch towers. The Kazarma has since been carefully restored and is open to the public offering a panoramic view across the bay of Sitia.

Concerts, plays, lectures and art exhibitions all take place in the Kazarma during the summer months as part of the festival known as "Kornaria". 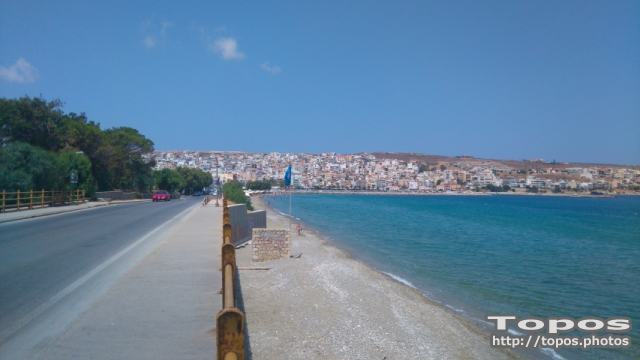