Upload your photos for Voila Tower and share them with us!
Press here.

The settlement of Voila (In Greek: Βόϊλα) is 1km away from the village of Chandras in Sitia area, Lassithi Prefecture. It is a medieval deserted village protected by the Greek Archaeological Authorities.

The name Voila probably comes from the Byzantine word Voilas or Volias, i.e. a nobleman, a landowner. The current form of the church constitutes a complex made up of the conjoint churches of St. Georgios and St. John the Evangelist. St. Georgios is located on the southern side of the church complex and predates St. John’s church. However, the lower section of a niche that protrudes to the east indicates that it was also built over an older church.

The two churches, which communicate through large arched openings, belong to the type of single-nave barrel-vaulted churches with two transverse reinforcing arches. The western part of the church of St. Georgios is slightly elevated compared to the rest of the church. It seems to have been modified to accommodate the tomb of the founders, which is also the most interesting aspect of the whole building complex. It is in fact a pseudosarcophagus located in the southwestern corner. Above it on the southern wall, an arched frame with a funerary fresco accompanied by an epigram of folk style can be seen.

The scene depicted is that of the Virgin Mary and Child sitting on a throne, while on either side there are two noble couples. One of them has a child with it and is wearing interesting clothing, and the second couple is of older age: According to Gerola who dated this scene to 1516, the eldest person depicted is Georgios Salamon, a Venetian Patrician (Gerola 1993, p. 339 and fig. 17). Following specialised research, this appears to probably be the ancestral family of our national poet Dionysios Solomos, which moved to Iraklion and from there to Zakynthos. This surname is found even today in the villages of Sitia. Many people with the surname Solomos lived in Chandras according to Gerola. The register of noble lords of Sitia of 1582 mentions Giuane, Piero and Marco under the surname Salamon, names which also appear alternatingly in the family tree of the Solomos family in Zanynthos.

On the western wall above the tomb, there is also a second fresco of small size in a rectangular frame, which depicts a mourning scene and bears an inscription dated 1560 A.D. 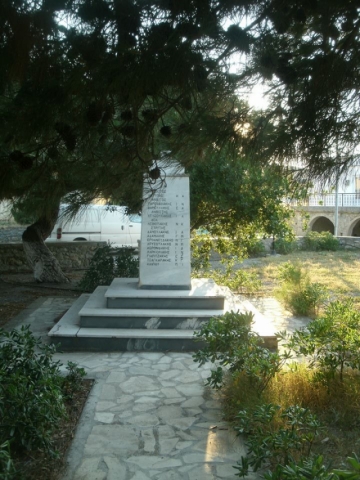 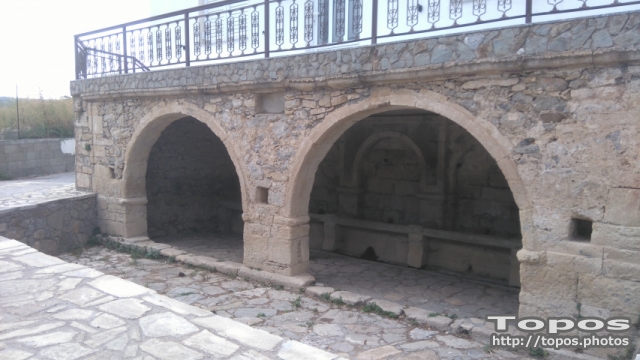 Situated 24 km south from Sitia City, in the far east of Crete on the Ziros plateau, high up in the mountains is the   village of Handras - reached by a winding path through olive groves. This is a traditional village, where it could appear that time has stopped still. Houses sit in the sunshine, each courtyard carefully tended, whilst ruins whisper of their past. Villagers call to each other that day’s greeting, carrying pots of food or bags of fruit.The land surrounding us provides a fruitful and fertile plain on which the bounty is grown throughout the year. Greeks are engaged in harvesting that month’s current crop: oranges; lemons; olives; artichokes; grapes; tomatoes… The air is fresh and startling, the sun warming and the occasional breeze flutters through.Here you can see and be part of the real Greece and stay in a working and living mountain village that is open all year and not just dusted down for  tourist Season. We are ideally located in Handras for you to explore the surrounding area of Eastern Crete, travelling through mountains and olive groves to towns and villages, ports and harbours, beaches and coves and ancient sites.From Sitia to the mountain village of Handras is approximately 25km, 580 metres above sea level. On this route you will drive on left and right hand bends that turn you around and give you gazes and glimpses of a great picturesque landscape. On your journey you will see the lushness of the green valleys and many of the olive trees on Crete, laden with the fruit to be turned into the world famous olive oil.The mountains will fade into the background of your drive and large spaces of openness appear. The peoples land stretches out in front of you on which grow fruit and vegetables for all needs. Potatoes are a fine supper with lemon and Raki, sprinkled with salt; best cooked in an open fire. Large greenhouses are full of the most fabulous and tastiest tomatoes; you cannot beat them sliced thick, just as they are picked with pepper and vinegar.As you drive up into the clouds along the twisting roads you will often see eagles and hawks gliding in the sky. Lizards can be seen basking in the sun on rocks that have seen many pass by.Passing through little scattered villages you will see a cross-section of Greek life: old ladies dressed traditionally in black, carrying anything from wild vegetables to dry grass for the animals; people tending their land; old men sitting around tables, drinking coffee and talking whilst grazing on plates of meze. This is the true and likeable Greek way.Onward and upward, climbing the hilly roads you will smell the mountain herbs that awaken your senses, fresh air will startle your lungs with the memory of the salty sea and you will be embraced by the saffron gorse bushes that flare up like a saffron screen.
>> More info... 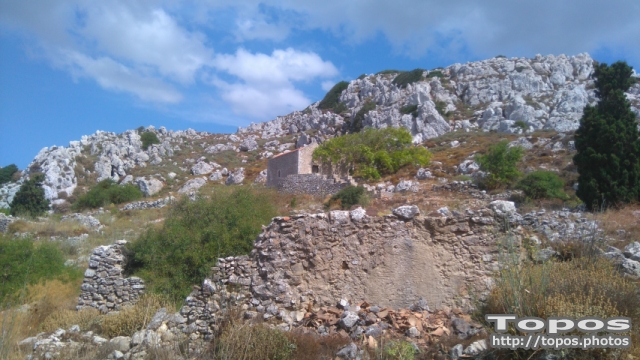 The twin-naved church, dedicated to St. George and to St. John is located southeast of the settlement of Chandras and next to the ruined settlement of Voilas which is dominated by the magnificent medieval tower. The architectural type of the church has emerged as a result of the successive interpolations to the original, single-nave church, the present south aisle, which was originally expanded to the west and to which the north aisle was added later. On the south wall of the western expansion is a funerary ­monument-arcosolium that has the worn representation of the enthroned All-Holy Virgin the Vrefokratousa with the donors, members of the ­Salomon family, on its drum. George Salomon in 1518 and members of his family in 1560 were buried here, according to the two written inscriptions. A very interesting miniature ­representation accompanies the second inscription on the west wall, in which a scene of funeral mourning is depicted, in a monotone colour scheme, with the dead woman on the deathbed and, around it, the threnodists and, probably, relatives lamenting. 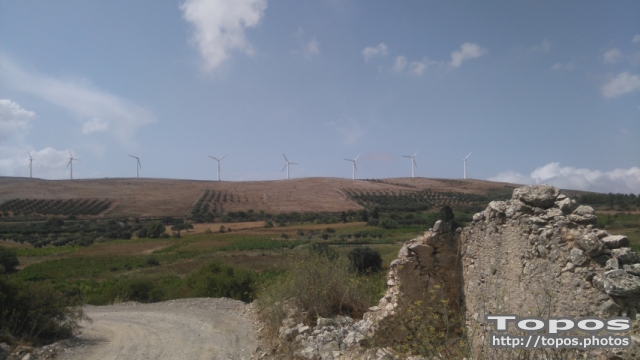 In the Voila position to the east of Chandras are the remains of a Venetian castle, which include parts of the tower, the storerooms and other constructs, as well as two of the fountains that supply water to the area to this day. 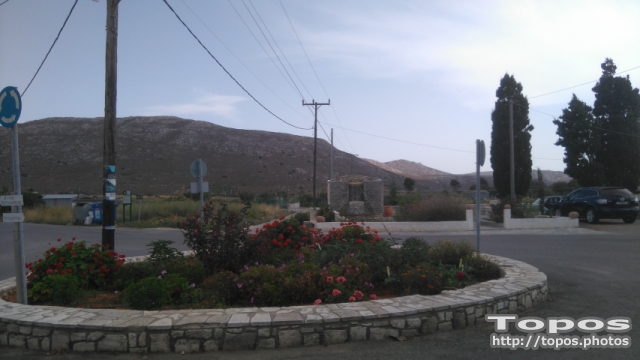 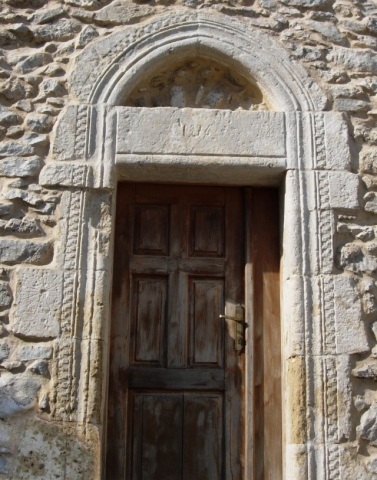 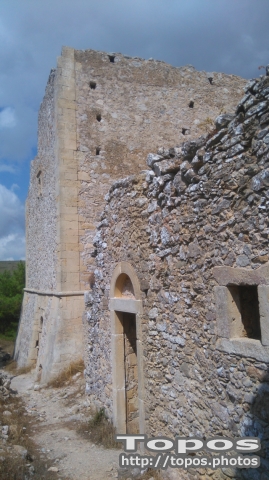 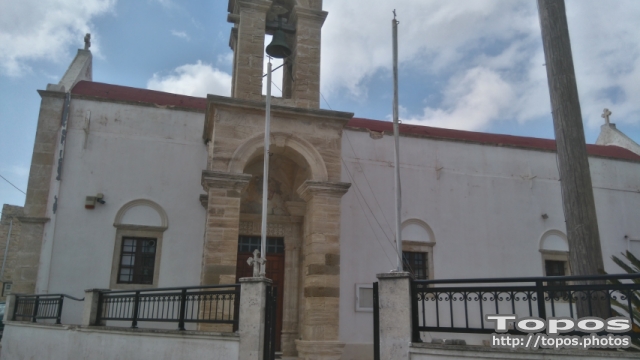 A large, single-space church, it dates back to the mid-15th century and quite likely once served as catholicon to a monastery than no longer survives. The church is extensively decorated and its murals survive in relatively good condition. Worthy of note are the depictions of the Twelve Great Feasts and of scenes of the Second Coming, as well as the mural of the cycle of Creation and the Expulsion from the Garden of Eden. 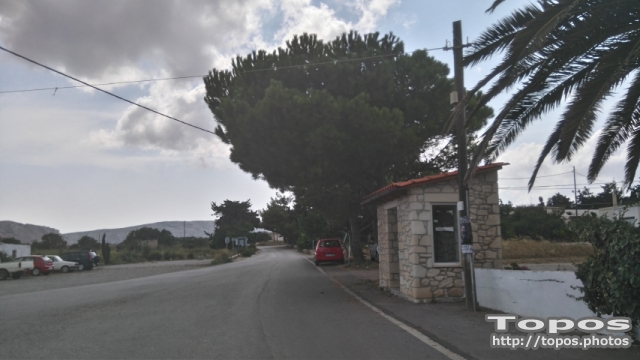 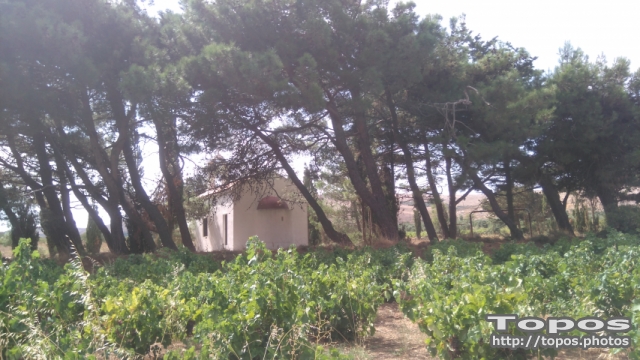 South of the Venetian castle in Voila there is a fountain with relief sculptures on the limestone. 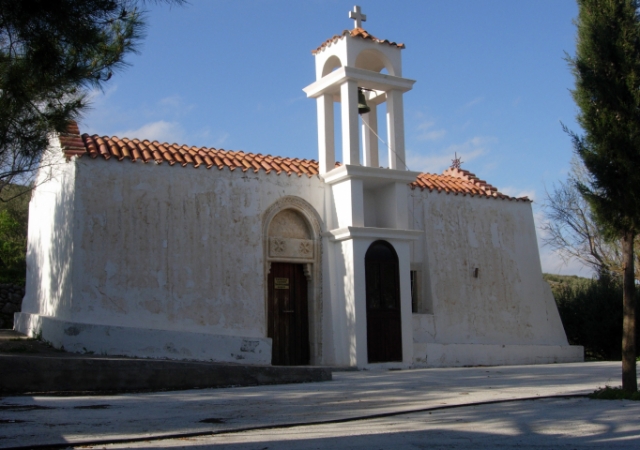 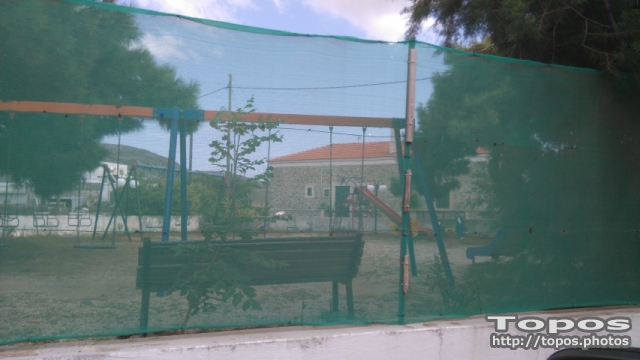 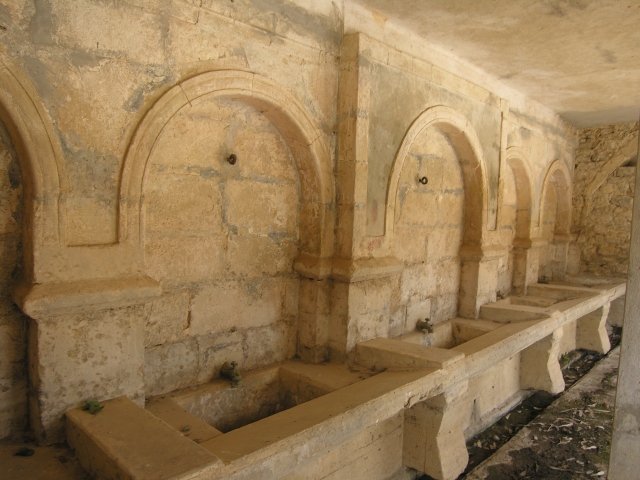