Upload your photos for Mournies and share them with us!
Press here.

A village of chieftains, a large village, the seat of the former Municipality of Mournies, along with the villages Gdohia, Kato Pano Symi, Mythoi, Myrto, Riza, Parsas and Christos, which in 1881 numbered 2,213 residents along with the settlements Karydi and Minos.
It is a beautiful, historical, picturesque, traditional village with coffee houses, a square and a memorial for the fallen fighters, the old fountain, old narrow streets branching away of the village’s central road. It probably took its name from the mulberry tree (Mouria), although it is not abundant in the region.
The present settlement of Mournies perhaps does not give away its old glory, however during all the years of the revolts against the Turks it has been an important revolutionary and administrational center of the East Province of Viannos, of which it was a part until 1929, since the time of Captain Syggelis Hatzianagnostis or Symiakos, his son Emmanouil Hatzakis and his descendants, who were renowned as national fighters. The Hatzakis family, with their great financial power, armed and sustained guerilla corps and took part in most battles in the Eastern Crete. As they were personal friends with the national leader Eleftherios Venizelos, he often was their guest at their home in Mournies that had 24 rooms.
The village was burnt down during the German Occupation and paid the price of its struggles having 17 of its residents executed.
The now abandoned settlement of Pano Symi, in the north-west of the village, at an altitude of 900 m, on the borders with the Prefecture of Heraklion, belongs to the Local Department of Mournies, of the Municipality of Ierapetra. The largest village, the summer seat of the Municipality of Mournies, numbered 527 residents in 1583. It was a fortified position and a wonderful landscape. The hideout of revolutionaries, it was repeatedly burnt down by the Turks and was blown up to its foundations during the German Occupation. An aerie, wrecked houses, old churches; admiration and a mixture of happiness and sorrow, touring in the abandoned Pano Symi with the legend of the hidden treasure.
The village Mournies, in the north of Myrtos, at 25 km away from Ierapetra, at an altitude of 275 m, is built in an amphitheatric way in the south-east parts of the Lasithi mountains, with a beautiful view to the Libyan Sea and the plain of Ierapetra. Its climate is good, mild, without extremes, ideal for permanent inhabitation and for holidays. It is a semi-mountainous landscape without glasshouses, with olive groves that are sufficiently watered from drills. In 2001,
83 residents were registered in the census. During the 60s it suffered, like all villages, from urbanization, emigration and during the 70s it obtained the elementary infrastructures. However, today, the residents of Mouries come back, renovate the houses of their ancestors, take care of their olive cultivations and revive their village. The village’s distinguished emigrants are the ambassadors of its history, its civilization and its tradition. The old manors, the picturesque churches, the coffee houses with the friendly and hospitable residents and visitors create a picturesque, traditional Cretan environment in Mournies of Ierapetra. 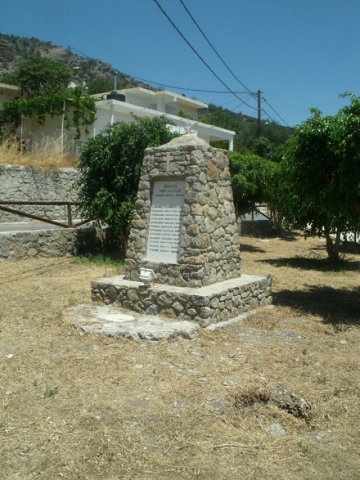 A stately village built in settlements, 22 km away from Ierapetra, at an altitude of 225 m, next to the Ierapetra-Vianos provincial road. A green landscape, overgrown with olive trees, with an unlimited view of the Libyan Sea, to the surrounding areas Koleitos, Kakon Oros, to the beaches Vatos and Kallikovrechtis.
An almost abandoned village, with old houses built of stone, with chiseled door frames and coats of arms bearing the Christian cross and proving its old glory and history.
Giannis Dimitromanolakis, an author from Gdohia, writes:
“Gdohia sprouted right opposite the beach of the Libyan Sea. Nothing would have been better for the pirates, who, like diabolical ghosts, emerged into the night to kill and prey. The village’s history is dipped in blood, as it often suffered from the raids of the pirates from the Barbary Coast. It took the name Gdohia from the catastrophes, from the verb “gdyno”, to skin, to set fire, to devastate.”
Gdohia’s course in time has evidence of struggles, sacrifices and holocausts to show. It was not only exposed to the pirates but it was situated on the natural south passage going from the Viannos area to the Ierapetra area. This meant that the hordes of barbarous conquerors burnt and devastated it, along with the other Symiana villages, as they are called, in the West Ierapetra.
Gdohia’s settlements are built leaving a distance between each other: Kato Gdohia or Pitropiana, taking their name from the Epitropakis family living there, Pefkiana or Grysboliana, from the Grysbolakis family, Dimitromanoliana from the Dimitromanolakis family, Daskaliana from the Daskalakis family, Papadiana from the Papadakis family. Great stonecutters, stoneworkers, famous for their art, Gdohia’s residents built the mansions of the whole area and the famous bridge of Myrtos using stones from the quarries of Kolleitos.
The miraculous church of Panagia (Our Lady) Evaggelistria of Gdohia, a work of art and a great ecclesiastical monument is also built by Gdohia’s residents.
Gdohia village, once the seat of a Community, today a Local Department of the Municipality of Ierapetra, presents an exceptional sight-seeing interest. It provides natural landscapes, beautiful beaches, picturesque little churches on
the hills, a spacious square with palm trees, seats and a war memorial for the fallen fighters of the liberation wars. In the 1881 census, 296 residents are registered and 73 in 2001. Gdohia’s permanent residents, along with some foreigners’ families who have bought and renovated old houses, struggle for the village’s development which gradually acquires the necessary infrastructures.
A village with rich history and civilization, with vast olive groves, a nice mild climate, both during summer and winter, it hopes to come back to life.
The old mansions, half-wrecked and burned in the German Occupation, stand as if they were sculptures, a painting with the deep blue Libyan Sea serving as a background, narrate the flourishing, the glory and the history of Gdohia and wait to be inhabited again.