Upload your photos for Church and share them with us!
Press here. 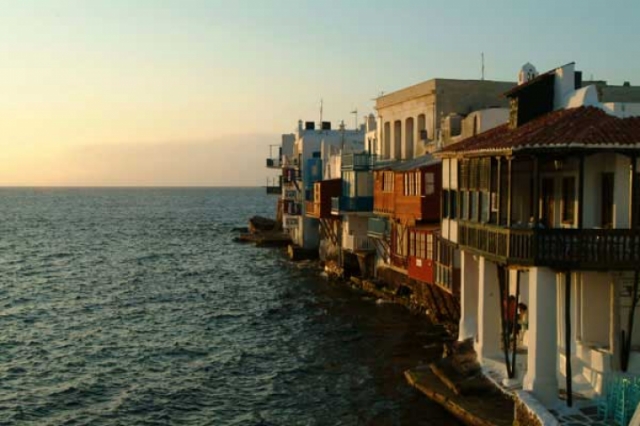 Concidered the most cosmopolitan Greek island, Mykonos attracts a great number of visitors including many artists and celebrities from all over the world. This amazingly pretty island offers all amenities of a modern resort with many activities for day and night. It is famous for its hectic night life and its golden sandy beaches. Low rocky hills, ending to crystal water beaches from the genuine mykonean landscape. Chora, the capital of the island, with its paved narrow streets flanked by gleaming white-washed houses, all with brightly painted window shutters and wooden balconies which ablaze with colorful geraniums and variety of shops, tavernas, bars and clubs, gives to the visitors the unique sensation of a film scenery. Ano Mera, is the most important village after Chora offering accommodations, while some of the most frequented bays are Ornos, Platy Yialos, Aghios Ioannis and Super Paradise with sandy beaches lined with umbrellas and sun beds. Always famous for its nightlife, Mykonos is still one of the liveliest places in Greece after dark and if the idea of a perfect holiday is a beautiful setting, great beaches with water-sports and lively nights, Mykonos should be on the top of everyone.

Perhaps the most important of the tourist asset of Mykonos, one which distinguishes it from other islands are the beaches. Particularly in the South, the picturesque coves with sandy beaches follow one another. Those beaches, can be reached by car or motorbike. Many Southern beaches are linked with each other with a boat operating on a regular service, all day all summer, which offers the visitor a very interesting excursion opportunity.

Among the attractions of Mykonos, Mills are the trademark of the island with the old Bonis Windmill being the most distinctive one. Bonis Windmill, one of the Upper Mills (Apano Myli), dates most likely from the 16th century.

This mill, originally belonged to the old Mykonian family of Bonis, the Mykonian windmill is a stone-built three-storey and cylindrical construction. The ground floor is used for the collection and weighing of the grain. The flour is collected on the middle floor, while there is an ancient milling machine on the second floor. The sail-wheel of Bonis Windmill has twelve wooden spokes with the same number of triangular sails.

Agriculture Museum
The Agricultural Museum of Mykonos was established subsequently to the 1st Symposium of the Folklore Museums of Greece, which was held in Mykonos in1984.  It serves the idea of an outdoor museum, which includes as its exhibits the Bonis Windmill and some other newer facilities, such as the threshing floor, the dovecote and the oven. The Windmill, the threshing floor and the oven are the tree rural installations that for centuries have provided the locals with bread, the most significant part of their everyday diet.

Lena's house, near the Three Wells, is a charmingly preserved, authentic 19th century Mykonian middle-class dwelling, which is completely furnished and equipped with antique furniture and house utensils.