Upload your photos for Ampelos - Hellenistic city in Xerokampos and share them with us!
Press here.

The Hellenistic ancient city of Xerokambos is located 1 km southeast of Xerokambos village and 29 km south of Palekastro, Lassithi prefecture.

Recent surface excavations have proven that the area has been populated since the prehistoric times and is of great archeological interest. In the site of Katsounakia a large Minoan settlement was found but has not been excavated yet. In the hill of Trachelas a sanctuary was also found but had already been desecrated. Furthermore, in the area of Psili Ammos one can see the ancient stone quarry that was used to build the ancient city. There are also numerous salterns used for sea salt production. They consist of a series of canals and founts that are dug in the rocks of the seashore.

Today they are mostly covered by the sand of the beach. Across from the Kabali area one can find a series of islets with installations dating from the post-Minoan era (1500-1300 B.C.). Also in the Farmakokefalo area important excavations started in 1984 by the archeologist N. P. Papadakis. An important Hellenistic city was found which is speculated to be the ancient city Ampelos, spanning throughout the contiguous hill and surrounded by high city walls. Only part of the city-walls is still preserved.

Many houses, roads and other findings have come to light uncovering an important part of its history. The city was built sometime during the 5th century B.C. and flourished during the 3rd-2nd century B.C. There was trade with other Cretan cities and the Dodecanese; especially with Rhodes and Kalimnos islands. Characteristic findings include lead pellets used by the slingers of the army. The excavation findings are kept in the Archaeological Museum of Sitia. Finally, in the centre of the city the small church of Agios Nikolaos dating from 1895 can be found. 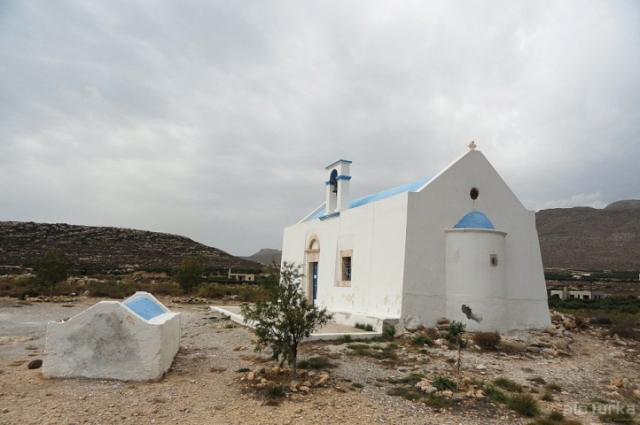 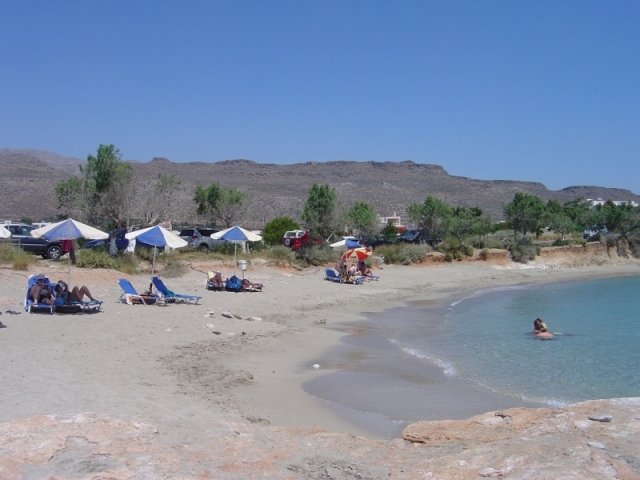 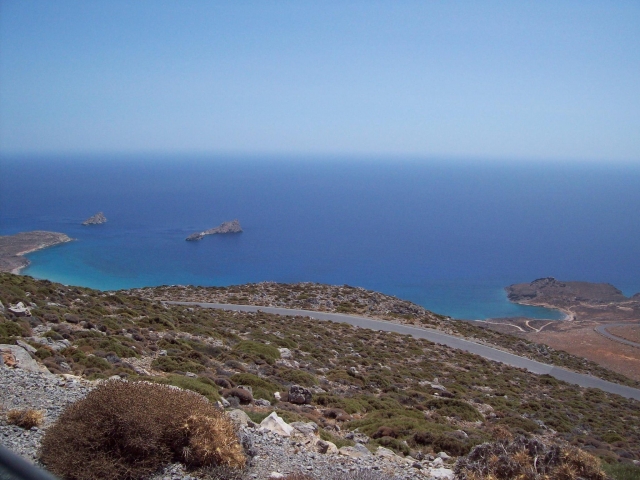 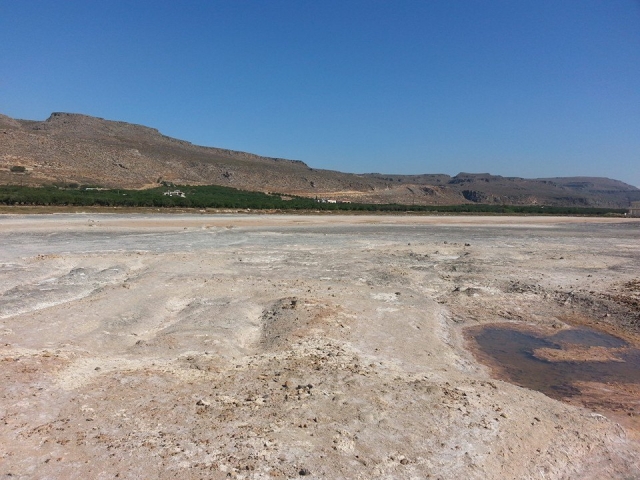 Xerokambos Salt Marsh
The Xerokambos salt marsh is on the southeastern side of the hamlet by the same name and is a large seawater lake, which in the summer evaporates, leaving sea salt deposits behind, thus called “Alatsolimni” (salt lake). 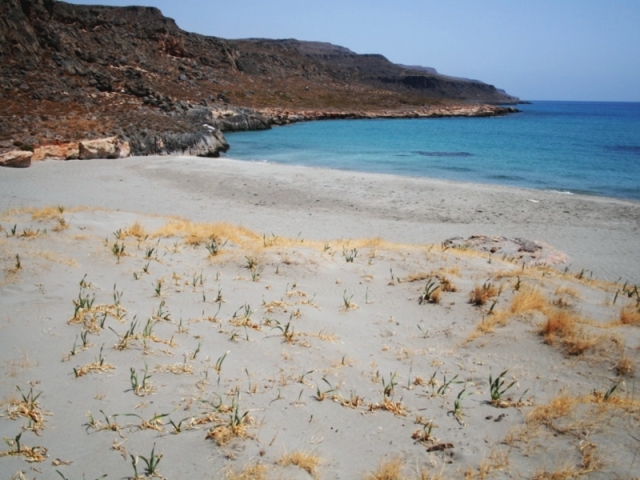 Xerokampos in east Crete is a beautiful pristine isolated area which is located 48km from Sitia and 29km from Palekastro and 9Km from Zakros.
The beaches are beautiful and ideal for those who seek peace and relax vacations. At the same time the shallow crystal clear water make Xerokampos an ideal destination for family vacations.
The main beaches  are:
Xerokampos main beach
Alatsolimni beach
Potamos beach
Katsounaki beach
Argilos beach
Gerontolakos beach
Tis lygias o lakos beach
Stou maznta ton ammo beach
Amatou beach
Regarding food and entertainment there are  taverns – restaurants  with tasty traditional Cretan food and fresh fish.
In Xerokampos there is also a mini market that can cover all your basic needs, For gas station and pharmacy you have to go either tο Ziros or Zakros.
>> More info...

Xerokambos village is an expanding coastal settlement in the far east of Crete, 42 km from Sitia and 28 km from Palekastro, in a place of considerable natural beauty.

This wonderful unspoilt part of East Crete is open and spacious. It has long sandy beaches & many small sandy coves, all set in front of some wonderful olive groves. Here you can spend idle and restful days recovering from the stresses of everyday life. There are but a few places to stay, the same with tavernas. There are two roads to go to Xerokambos. The road from Zakros to Xerokambos is a dirt track road (9 km). From Sitia, drive the Makrigialos and Piskokefalo road. After 10 km, in Episkopi, turn left to Handras, Ziros, Hametoulo and Xerokambos (45 km from Sitia, on a new surfaced road). There is a small temporary lagoon (dry from the end of May). In March and April tavernas are not necessarily open. Xerokambos beach life at its most tranquil in a dramatic setting.

The ancients were certainly aware of the beauty of this spot and its important position on the shipping routes off the eastern shores of Crete, as the site has been inhabited since Minoan times (Read about the Hellenistic city of Xerokambos).

The water Museum and the old Watermills in Zakros Village are worth visiting within the village and the Kato Zakros beach.

South of Xerokambos is the renowned beach of Argilos, where the Pliocene marl make their appearance. This marl has two unique characteristics: they contain a high percentage of clay and they are very fragmented. Thus, they can easily be broken off by hand and used by bathers to apply natural clay to their body! 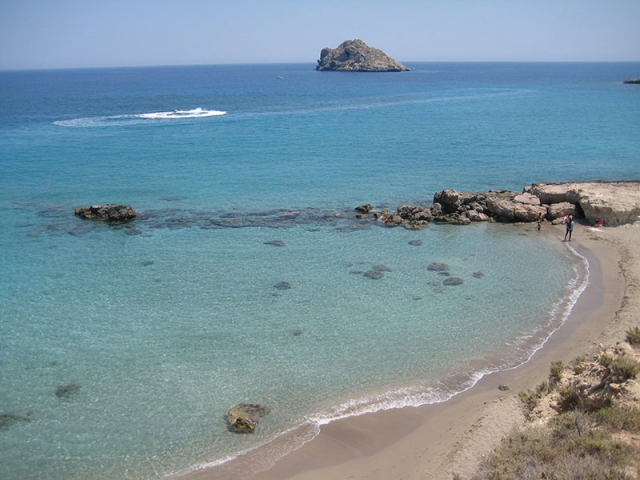 The Cavali Apartments, located in a beautiful location in Xerokampos about 50 meters from the beach of Ambelos and 100 meters from Akrogiali Tavern, is a modern and comfortable facility, completed in 2008 and owned by Manolis Voutirakis.

The distance from Heraklion Airport is 176 km, from Agios Nikolaos 105 km, from Sitia 45 and from Palekastro village 25km. 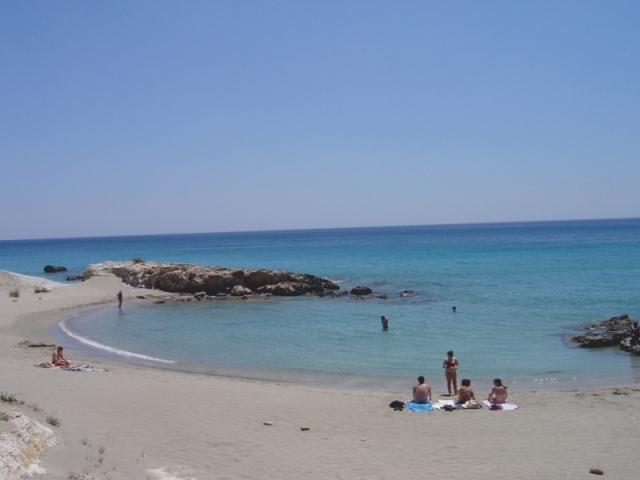 A block of flats with 6 studios, air conditioning, 3 Gardens and 3 floors that lies on the same property as Taverna Kostas, into a beautiful garden, surrounded by olive trees close to Xerokampos beach.

The village of Zakros is only 10 km far and Kato Zakros 19 km. At the northern entrance of Xerokambos village, Lassithi prefecture, on the main road that runs through the village to Ziros, “Zeus” Apartments are located.

The distance from Heraklion Airport is 176 km, from Agios Nikolaos 105 km, from Sitia 45 and from Palekastro village 25km.

Michalis and his mother Chrisanti Theodorakis are welcoming and inviting you in Xerokambos to "Taverna Kostas". For over 20 years now, Chrisanthi cooks her Greek and Cretan specialties with passion, a unique enjoyment full of fresh vegetables. Meat and fresh fish are grilled for you on charcoal.

In our Tavern, you can of course enjoy your coffee, a cool beer, native wine or other refreshments. The beautiful Xerokampos beach is only 150 m far!