Upload your photos for Psira island and share them with us!
Press here.

It is a small island ίn the north west of Mochlos that you can visit by boat from Mochlos or Agios Nikolaos. It is uninhabited now and barren.The name has alternative spellίngs and must have come about because the shape of the island seemed to resemble that of a louse ( psira : louse). South-west of the island, tucked into the corner of the bay of Merambello, is another tiny island called Konida - «the nit». It was a big Minoan hub-harbour. The settlement which was amphίtheatrically buίlt οn the side of a small cape consisted from the houses of traders, seamen, craftsmen and fishermen. Ιn almost every house existed a fireplace at one corner. There were some bigger houses one with a private temple, one with obviously a dry dock and another one decorated with exceptional murals simίlar tο those from Knossos. Two bear breasted women are depicted with fancy dresses sitting οn a rock near the seashore.Numerous very good finds οf the Minoan era were discovered especially pots. The settlement was twice destroyed once due to an earthquake and after that by the volcanic eruption οn Santorini. Psira was inhabited again in the Roman time. The excavations by the Αmerican Archaeological School are continuing. 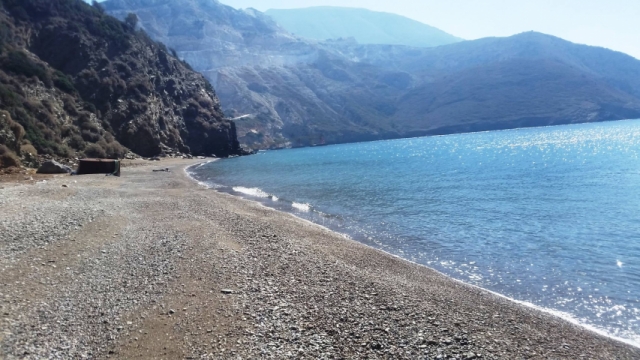 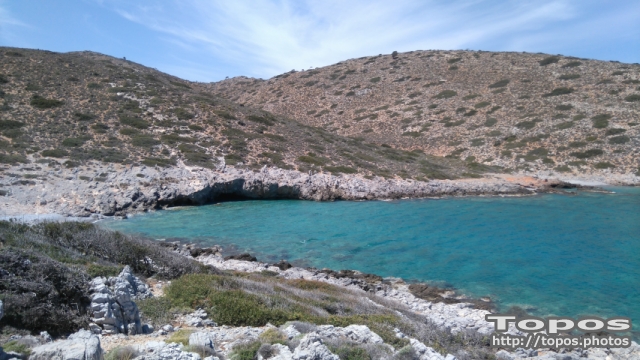 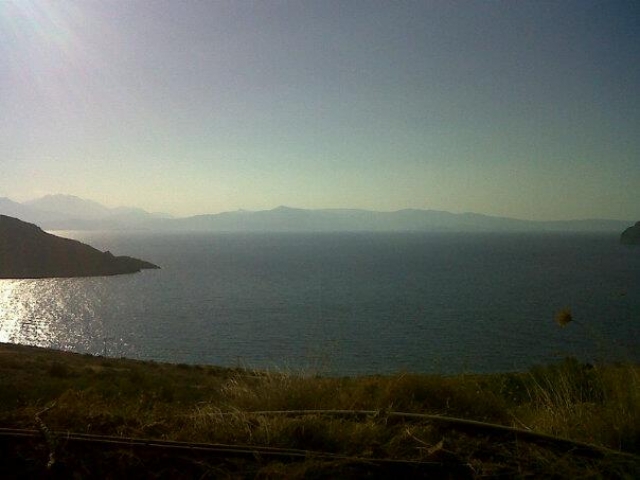 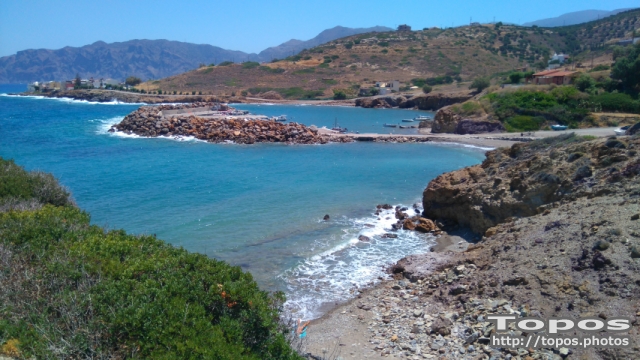 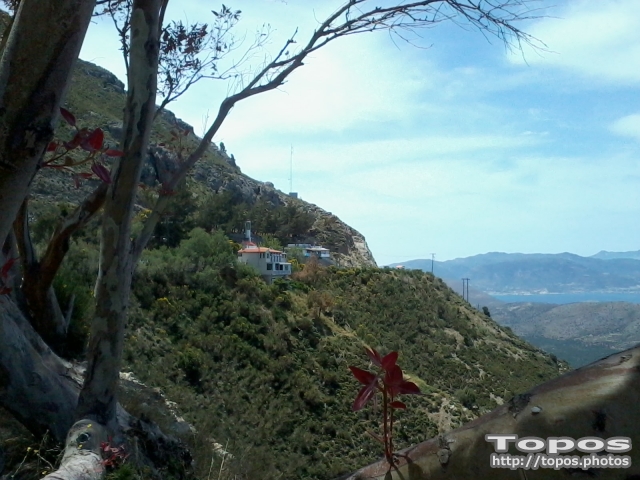 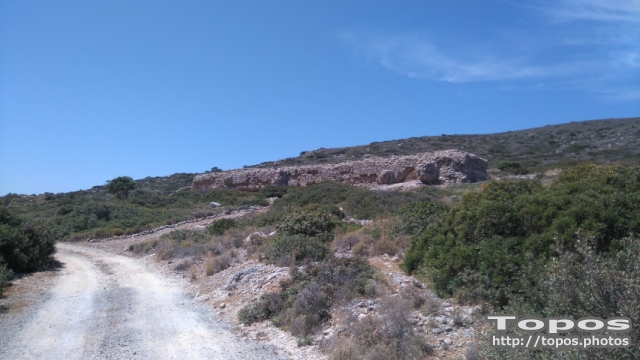 Intensive archaiological survey has shown that the Tholos warehouse probably served as a granary of horreum from which Rome received shipments of its grain supplies. The port of Tholos has had a long history of occupation and use as a commercial harbor and transshipment point, from the Middle Bronze age (ca. 2000 BC) untill the Roman period (1st c. BC-6th c. AD). Especially during the 1st and 2nd c. AD, Tholos held a prominent position in wider intra-Mediterranean trade. The warehouse, elaborate in architecture and imposing in size, measures 55.70m long (N-S) and 9.60m wide (E-W). Of brick and concrete construction, it had a vaulted roof, plaster floor, and ten substantial buttresses on the east side. The port of tholos and this warehouse served as a transshipment point for boats carrying grain between Alexandria Egypt and Rome. Grain and other products, some stored in amphorae, would be unloaded in Tholos, stored for a time in the warehouse, and then shipped by carts across the isthmus of Ierapetra to cargo vessels waiting in the harbors of Hierapytna. 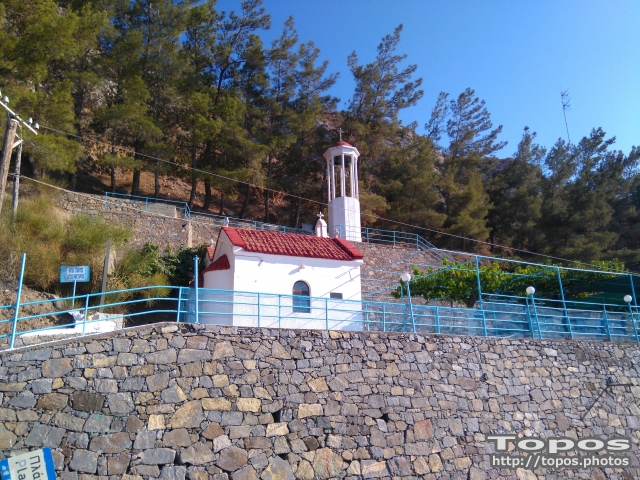 The church is contemporary, dedicated to All the Saints and to St. Nektarios the Wonderworker, the Saint of the 20th Century. It is located at "Platanos", in the area of Malavra of Kavousi, on the national road of Agios Nikolaos - Sitia.

Thw inhabitants of the area wanted to transform this ancient place of unsurpassable wildness and natural beaty with an amazing view of the bay of Meramvellou into a place of worship. The first church, the north one, is a barrel-vaulted, single-nave church, which was built in a night, from the 4th to 5th of June 1963, with the drafting of almost all the villagers under the supervision and general leadership of the active and untiring priest of the parish, Rev. Stylianos Paterakis. It was dedicated to All Saints, as the spiritual duty of the residents of Kavousi, for the protection of all the Saints of our church in the battles during the difficult period of the civil war in the area of Malavra. The Holy inauguration was held by the Metropolitan of Ierapetra and Sitia, Philotheos the Second, in 1964.

In 1966, a new barrel vaulted, single-nave church was added, the south, dedicated to the contemporary saint of the Eastern Orthodox Church, St Nektarios the Wonderworker, bishop of Pentapolis. Later the bell tower of the church was built and the surrounding space was configured. The Holy Inauguration was performed by the Metropolitan of Ierapetra and Sitia, Philotheos the Second, on July 9, 1967.

The church celebrates on November 9, feast day of St. Nektarios, and on the Sunday of All Saints. 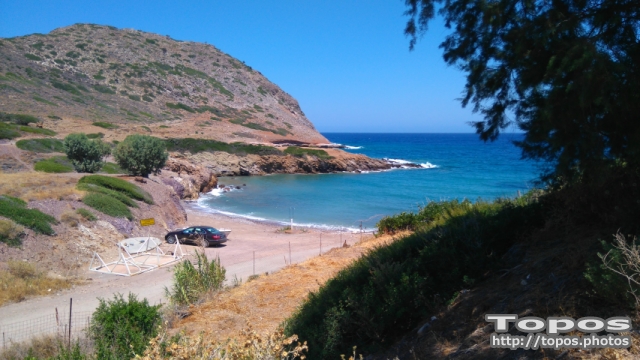 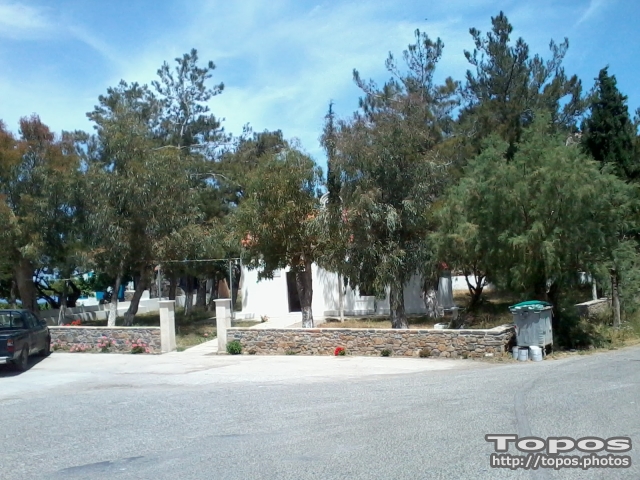 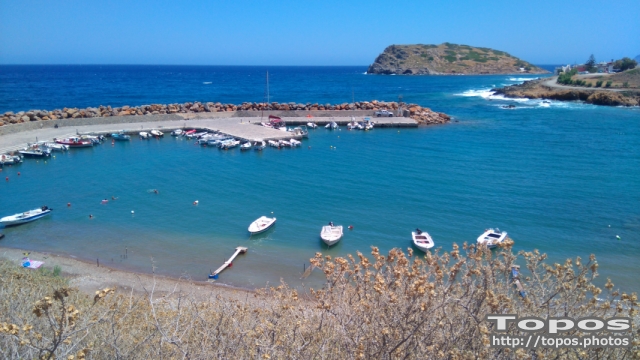 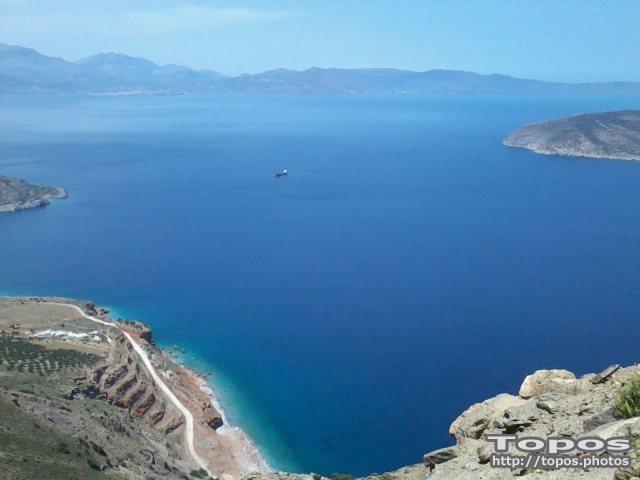 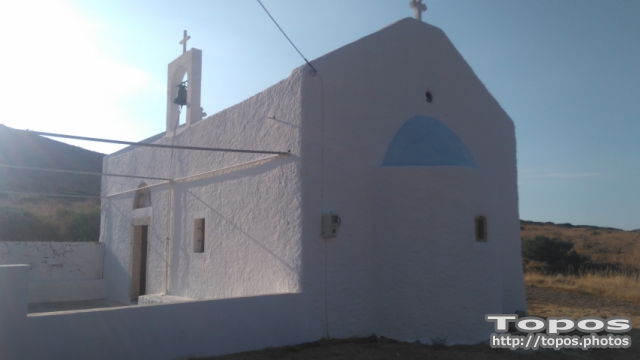 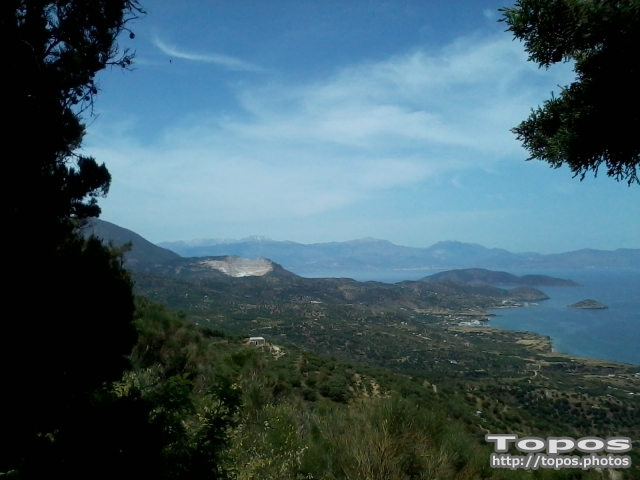 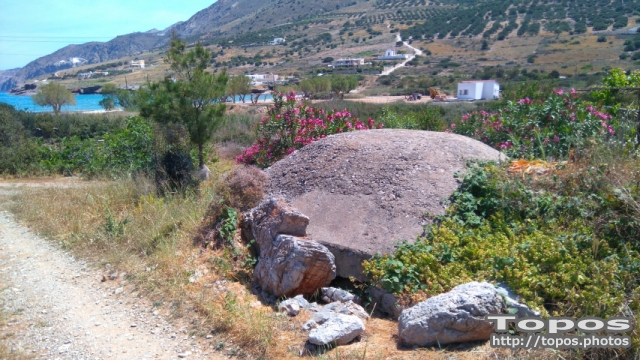 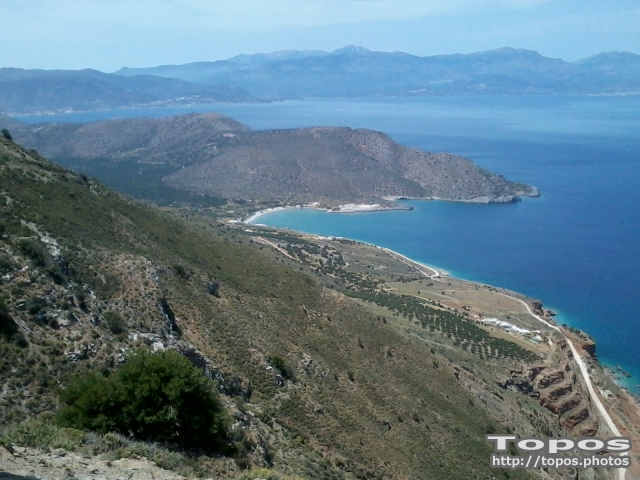 29 km easternly of Agios Nikolaos City. One pleasant surprise of the prefecture of Lasithi is the beach Tholos. In the coastal street of Agios Nikolaos-Sitia you take a left turn in the plates as soon as you reach Kavousi village. In the end of a winding way through olive grove this tropical beach is found.

Tholos is the beach of Kavousi and is usually quiet in the afternoon. The green waters and the olive grove that reaches up to the sand make this beach a destination for those who explore eastern Crete. The beach is nice, mostly with pebbles and sandy at the west end. There are some tamarisk trees near the beach, where you can find shade.

Apart from the taverns and restaurants at Pachia Ammos and the settlement of Kavoussi, there are also two fish taverns at the beach, where you may find fresh fish and seafood, drinks and refreshments. The beach offers some facilities for swimming and sunbathing (sunbeds and umbrellas), but, of course, the best shade is that of the tamarisk trees. The left end of the beach is better protected from the winds and the beach is sandy there.

Also, accommodation in hotels and rooms to let is possible and at the nearby village-resort of Pachia Ammos (some 8,5 kilometers far away, at the South). Together with a small church and one more house this is about all the buildings that you can find here.  A little bit past the main beach is another smaller hidden beach that is used by naturists.

Also at the beach of Tholos you may see ruins of the Roman period, whereas an Early Minoan settlement is found on the small islet of Psira, opposite to the beach. The fans of natural sightseeing should visit the Messona gorge or the impressive Kavoussi gorge and the cave Theriospilio, with interesting stalagmites. 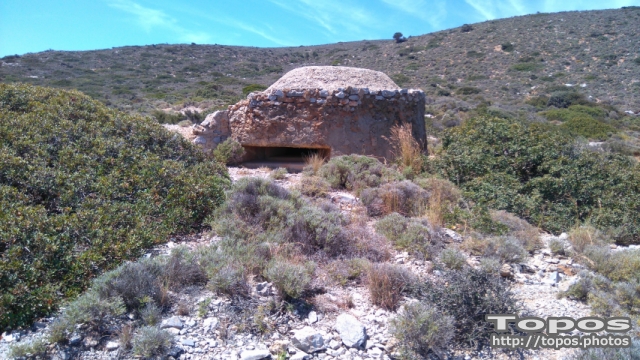 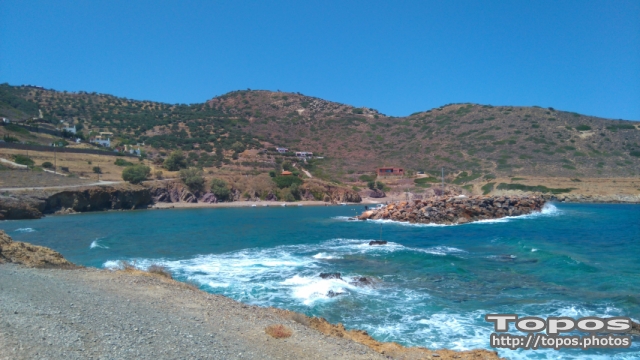 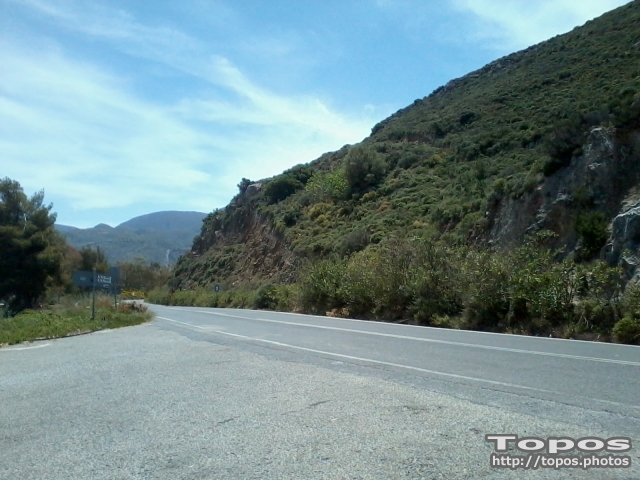 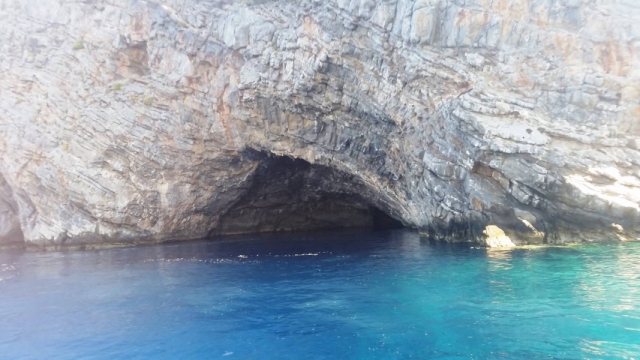 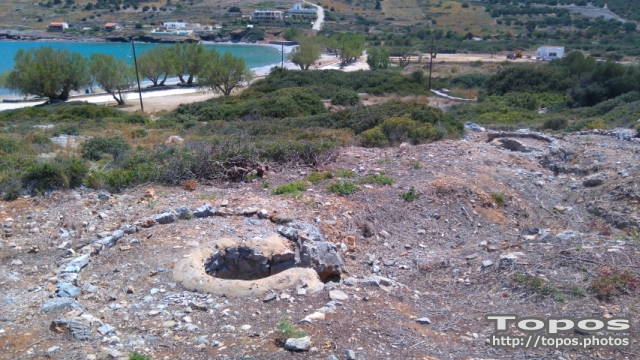 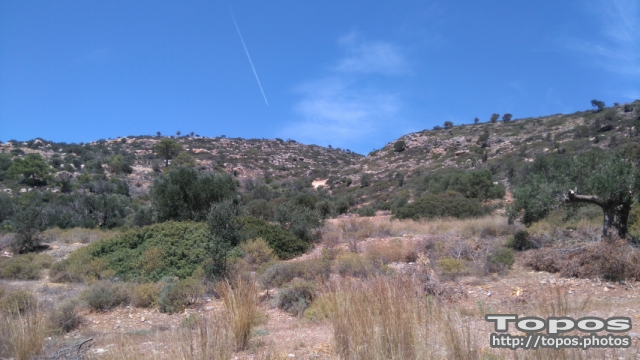 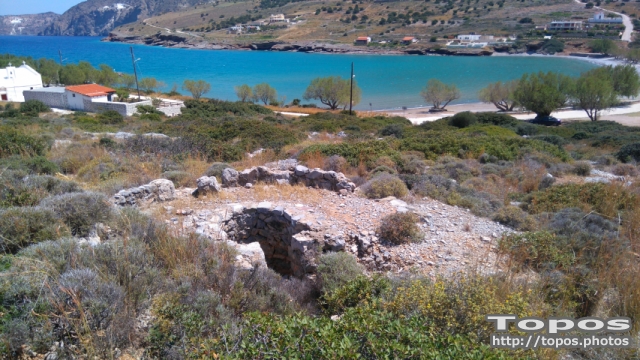 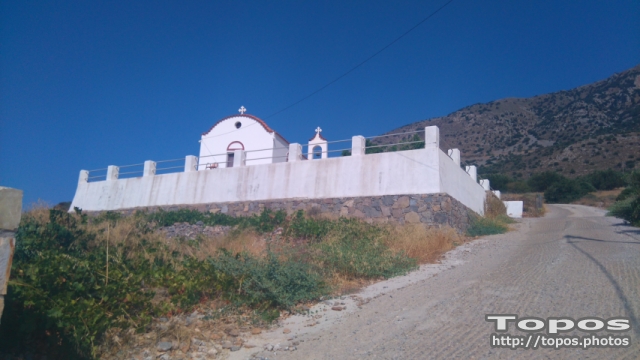 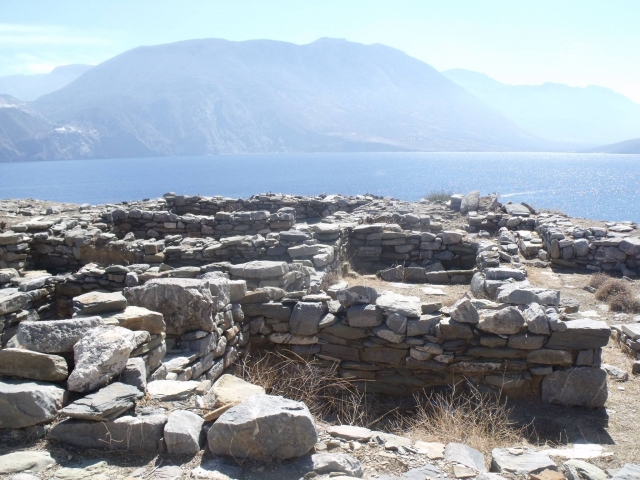 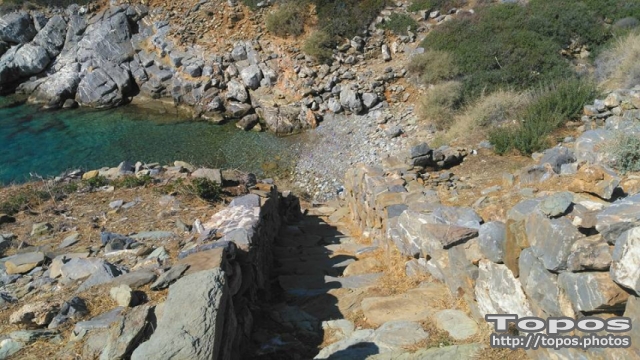