Upload your photos for Ancient olive trees and share them with us!
Press here.

In a distance of 27 kilometers from Rethymnon northwest of Psiloritis and at an altitude of 300 meters there is the picturesque village of Margarites, famous for the making of handmade creations which has been developed by its inhabitants since prehistoric times.

Following their ancestors’ traces as regards both the techniques and the aesthetic traditions the today’s inhabitants of Margarites convey their creativity and artistic sensitivity by creating popular art objects of the highest quality, keeping its various forms, like pottery, alive and with precision. As a result, our village is internationally recognized as a centre of architectural pottery.The geographical position of the village brings you close to important archaeological and historical places such as Ancient Eleftherna, the Abbey of Arkadi, the Cave of Melidoni, a post-Minoan tomb, the Ravine (Margarites Gorge) which is protected by the European Union and crosses the west side of the village, as well as the 23 magnificent churches, many of which are signs of the years of Byzantium.You can visit the Byzantine Churches like the church of the Saviour’s Metamorphosis which was part of a monastery that there was in the area before it was ruined, St Dimitrios west of the village (it is a particularly elegant church which has got an altar made of stone), and the magnificent church of St Ioannis which has got frescos since 1383, sign of the Byzantine churches. If you go for a walk in Margarites you can see decorated doors and walls which date from the period of the Venetian occupation. These signs, in combination with the narrow streets , give an exact picture of the traditional Cretan Architecture.The Margarites Gorge, with its wonderful view, captivates, fascinates and rests its visitors.The inhabitants’ civilizing activity with various events during the whole year, in combination with the historical and folkloric meaning that the village has, is the reason why our place is justifiably claimed to be one of the most beautiful and much talked about villages of Crete. Try a visit to Margarites and enjoy all the above.

HISTORYThe first reference to the occupation of the people of Margarites with pottery comes from the American traveler Richard Pococke, who travelled in Central and Western Crete in 1739. However, it is possible that Margatites started as a settlement of potters since its foundationAccording to the folk myths, the village was built when the queen of Eleftherna, Margarita, impressed by the beauty of the land, sold her jewelry and ordered for the creation of a settlement that was named after her. It is needless to say that this story is not based on any historical facts and consists a myth trying to justify the name of the village, connecting it with some kind of glorious past.The opinion of Vallianos is more reasonable. He connects the name of the village with the natural environment and more specifically the gowans. Besides, it is not the only case of a village taking its name from a plant or a flower. Lambrinakis connects the name with the location, speaking of the glowing location of Margarites.In Venetian and Turkish documents, however, the village is mentioned as Margarites and its residents as Margaritsanoi.For the etymology of the word there are two opinions: According to the first, the name possibly comes from the medieval noun "margaritis" that indicates the defector, the renegade and is related to the first resident of the village. According to the second opinion, that is generally adopted, the name of the village is connected to the byzantine word "magarikon" that indicates a vessel made of clay. If this is the case, then it is possible that in Margarites, there was a facility of potters, given the abundance of raw material, clay, water and fuel material.The name Margarites is mentioned inadvertently, for the first time, in scripts of late 19th century. Although in the censuses of the Cretan State the old name is still mentioned, from 1920 and onwards, the name Margarites prevails in the official documents of the Greek State.

THE WORKSHOP OF MARGARITESUnlike the other large pottery centre of Crete, Thrapsano, in Margarites one comes across numerous permanent workshops even before the 2nd World War, given that the residents of Margarites did not adopt the custom of seasonal moving in the same area.The workshops are organized outside the main cohesive part of the settlement, which is an ancient practice, but is also provided by the Byzantine legislation, at the south part of the village. Thus, the location of the workshops was not a burden to the other activities of the village, while it assured fastest and easiest access to mining sites of raw material.Although there is no production of pots (tiskalia) in Margarites, that is utensils, the settlement of the potters is called tsikaladika. This name is possibly taken from an older period in time, during which this particular vessel was produced in the area.There are two categories of workshops: the workshops for the production of small objects and the workshops for the production of earthenware jars. For the production of the first, the necessary foot-operated wheel was placed in a small rock built building, while for the production of the second, wheels were placed outside. In both cases, on the outdoors space there was a kiln called "aplotare", that is the space of soil and clay process called "limbes", in which the clay was cleaned and finally the bolting machines.

THE TECHNICAL CONSTRUCTION OF THE CROCKCharacteristic type of vessels due to their constructional particularities, the crocks were created in four phases.The technician created the first part with the bottom of the vessel on top. Then, this part, called "kitema", was dried on a wooden board. "Kitema" was wrapped in a shoddy, while the bottom was the only uncovered part in order to dry better.Once "kitema" was dry, the technician hit slightly the bottom with the comb. Then, he would turn it over and fit it in the base made of clay in a shape of a roll called "tomes". Then, the technician would raise the clay a little higher. The complete parts were called shells or bubbles.When the shell was dry the process of "laimoma" would begin. That is the shaping of the neck. In the same phase the lip was finished.The crock was finished, when the handles were in place.

DECORATIONIn the vessels made in Margarites one can distinguish the four kinds of decoration:the written, the incised, the depressed and the application.The written decoration was made through different kinds of brushes, such as a wood with three parallel bunches of wool and a feather for easier writing.The most usual written decoration themes were flowers, branches, birds and abstracted lines. The written jewelry, the inlays of the local dialect, were usually made from the wives of the potters with white or red color.The incised decoration was made with combs or other sharp objects.The applied decoration, that is the belt, is recommended in venations crossing the periphery of the vessel. Belts were placed on top of the join of each bunting after it was dry. This way the joins were reinforced. There are the round and wide belts.From the 15th to the 19th century, a form of suppressed geometric decoration was used in the Cretan jars or a mimic of a script with a seal cylinder from wood or clay. The suppressed decoration, however, was made with the pulley or the fingers of the technician.Part of the article was written by Nikos Simandirakis, Archeologist Tutor of the Modern Ceramics Research Centre

Margarites is a village, in Rethimno Prefecture, 15km east of Rethymno Town, well known for its marvelous architecture and the traditional pottery. However, in the wider area of the villages of Margarites, Orthe and Eleftherna appear a series of small, parallel gorges.


Small streams such as Margaritianos flow towards the north and are tributaries of the Geropotamos River. The gorges are developed in white-yellow marly limestone of the Upper Miocene period as a result of the uplift of the whole area and the erosion by water.

The most impressive characteristics of the gorges are the rich flora and the unique surroundings. Small tufts and /or copses of the horizontal branched cypresses (Cupressus sempervirens horizontalis) are mixed with low shrubs, wild flowers and aromatic plants.

Small paths have been developed by the Local Authorities that introduce visitors to the beauty of the area. For example, from the neighbouring village Plevriana you can go to Margarites by three different routes. 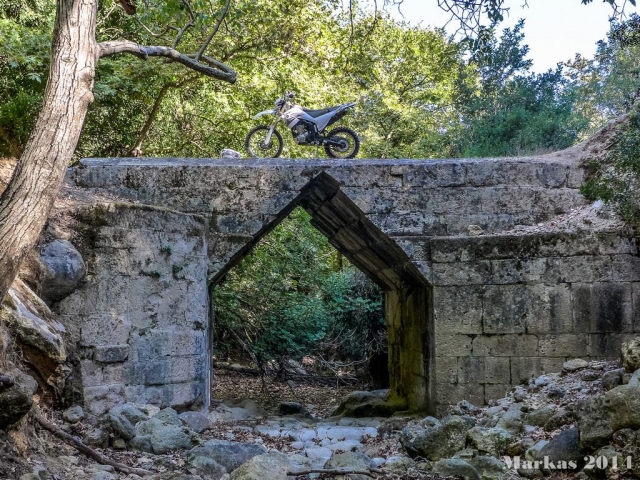