Upload your photos for Tower of Stamnoi and share them with us!
Press here.

Places near Tower of Stamnoi 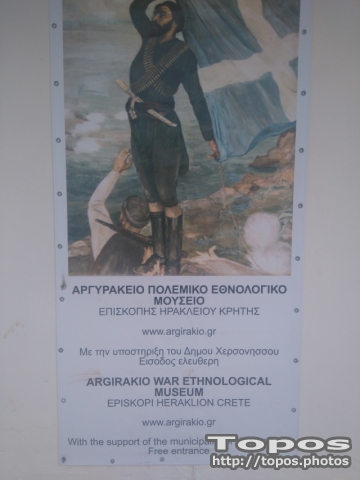 Established in 1994 by Mr.Michael Argirakis at his own expense and housed on the lower floor of his own house, no visit to the island of Crete would be complete without visiting this fascinating museum, not only to the military historian, but to anyone interested in general and local history. This museum is dedicated to the memory of his parents, John and Kalliopi Argirakis, who both died for their freedom of Crete at the hands of the invading forces during WW II. John Argirakis was killed in Chanea (Hania) and his wife Kalliopi was taken from the island to the concentration camp at Auschwitz (Oswiecim), Poland and died there after indescribable torment and torture.The purpose of the museum is to find, rescue, preserve and exhibit any material of either war or ethnological value to the Cretan people. Whilst doing so, to sensitize the Greek nation in matters concerning their cultural background, the virtue of war and the history of the Cretan people and to promote by all means the bravery for the defense of freedom and the Greek nation.The artifacts displayed in this museum were gathered by the founder and include important tokens and testimonies from the famous murderous battles of the Cretan fighters against the enemy during the invasion of the island, also from the National Resistance against the occupying forces that followed on Crete during World War II.These exhibits show the roots of the historical past of the Cretan civilization and reflects the memories and achievements of the fighters and heroes of the island of Crete.This museum operates as a non-profit Legal Entity of Private Law, according to Article 784 of the Civil Code, under the Decision 15454/22-9-94 of the Athens Court Of Justice.All photographs or digital images shown from this museum upon this web site are Copyright © www.northernmemories.co.uk 1998-2009 and are reproduced with the kind permission of Mr.Michael Argirakis, the owner of all material portrayed.

Episkopi (Επισκοπή) a beautifull and traditional village and the name of a municipality in the Heraklion Prefecture, Crete, Greece. Population 2,533 (2001).