Upload your photos for Kato Zakros and share them with us!
Press here.

The place - Kato Zakros
Small and personal, quiet and well - it's somewhere you feel a sense of ownership about the moment you arrive. At the end of a dazzling, exciting narrow winding road, descending from the plain around Zakros itself. The journey to Zakros builds and improves the experience that "you've really traveled" to get there. You are in the East. You've reached this wonderful coast and there is nowhere further to go! You are by the sea with a large pebble beach and often-dazzling waters. It's quiet, feels as "real" as a beachside place can, there is a little tourism as such and what there is mostly consists of daytime visitors to the Palace of Zakros archaeological site. The site is a prized destination for many and we've heard numbers of people call it the site that has most impressed them in Crete. There is a lack of mobile phone reception which delights some and will require adjustment from others!
How to get there - Kato Zakros
Sitia is the likely starting point by car, motorcycle or bus (bus info). From Sitia a bus to Kato Zakros exists and otherwise a wonderful car drive (about 1 - 1.1/2 hours). For the adventurous there are some wonderful and most indirect routes along unpaved roads - including an easily traveled (with slow pace and great care) one from Xerokambos. Or for stunning mountaintop views of the sea, gorges and mountainscapes, a journey made via Roussa Eklissia, Mitato to Adravasti is hard to match and most memorable - what a sense of achievement you feel after that journey! Another most enjoyable transition from any time spent in Sitia would be to travel to the beach at Vai (try to be there close to dawn or dusk to avoid crowds), perhaps including a visit to the fascinating Toplou Monastery (recommended-see more about it in Sitia) on the way and stop at Palekastro (many places to stay) and/or Zakros for refreshments or more solid food intake!
Where to stay - Kato Zakros
Athena Rent Rooms and below it, Coral Rooms. Both are just beyond the Akrogiali waterside taverna and have wonderful beach and sea views (closer, you could not be). The two have a total of seven rooms between them and communal terrace areas.
Poseidon Rooms, continuing a little further from where you come into Kato Zakros, is absolutely at water's edge, on a cliff about 8 metres (25 feet) above it. Poseidon is a lot older looking than the other two; room 6 definitely has a sea view, with room 7 of the side rooms being closest to the sea - these have a view along the beach and the edge of the sea. Akrogiali taverna can rent you rooms in all three of the above places. More information and photographs see website for Athena, Coral and Poseidon Rooms & Akrogiali taverna.
George's villas are away from the sea front beyond the Palace of Zakros. If all fails you can stay in Zakros (the Zakros Hotel looks somewhat lacking in character but would serve you well and they have a minibus for local trips) or Palekastro where there are many places to stay - many of them very obvious from the road as you drive through.
Winter does not appear in the picture at Kato Zakros but the Zakros hotel is open and you might find somewhere in Palekastro. Otherwise for winter a good bet is to use Sitia as your base.
What to see/do - Kato Zakros
The views, swim, walk (E4-path goes from Zakros through the Gorge of the Dead (5.5 km approx. very slow going, sid to take 6.5 to 8 hours!) to Kato Zakros where the gorge reaches the coast. Eat fresh fish and more at the tavernas, read, write, make conversation and visit the minoan Palace of Zakros.  Tour the mountain villages and other coastal points nearby, including Xerokambos (many roads are still unsurfaced, but an ordinary car will cope providing you take care). Go scuba diving at Vai beach.
Palace of Zakros: Open Tuesday to Sunday 18.30 to 15.00 (last entrance at 14.30) 500 DR (1.47 euros). 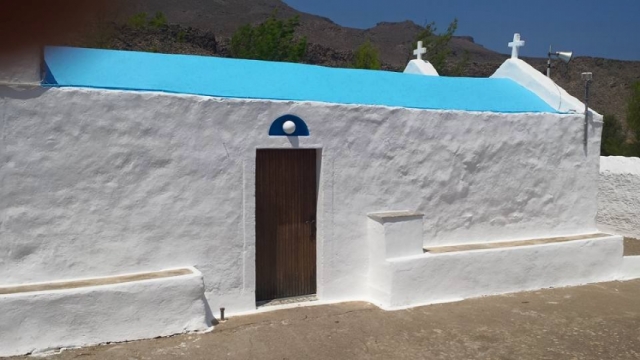 Coral rooms in coastal resort Kato Zakros for your holidays - vacation. Whether you sit on the terrace or gaze at the view of the beach and sea below from your room, Coral Rooms provide the real sea-side experience with comfortable and well  cared for surroundings.  Situated immediately below Athena Rooms, private bathrooms.  East Crete Kato Zakros!! 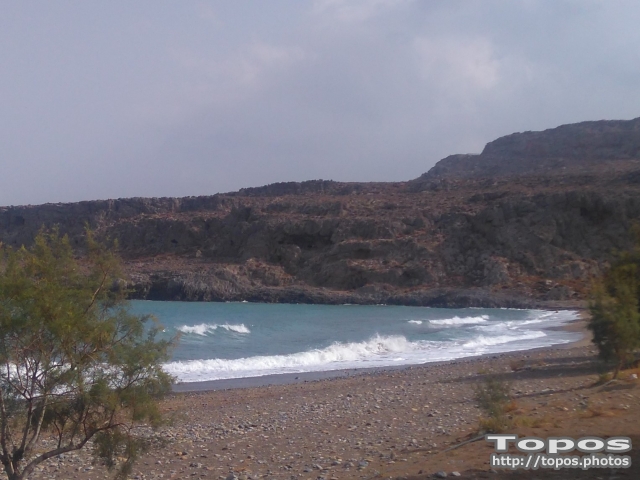 Rock Climbing
At the entrance to the Canyon of the Dead from Kato Zakros, several climbing routes have been carved out on the vertical limestone cliffs. Most routes have permanent safeties along their entirety and include a wide range of difficulty levels, for both beginners and experienced climbers. 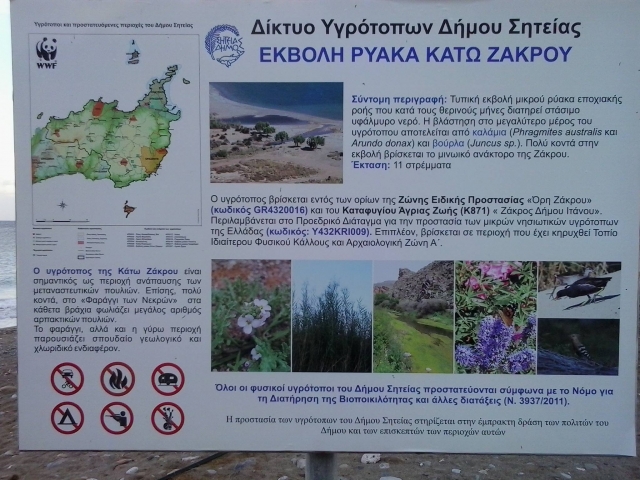 The owners George and Haroula Platanakis take great pleasure in informing you that they have built a small family tourist complex in Kato Zakros.

The complex is located at the top of a hill offering a panoramic view onto the plain, the Minoan Palace, the village, the Gorge, and the beautiful beach of Kato Zakros. Our hillside location means that there is always a cooling breeze. There is the following choice of accomodation: 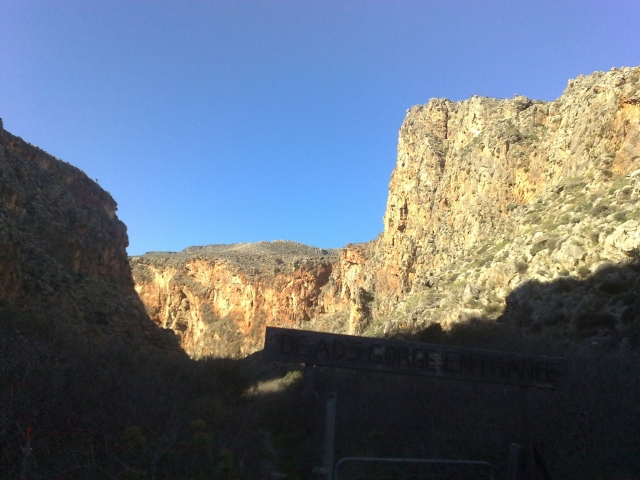 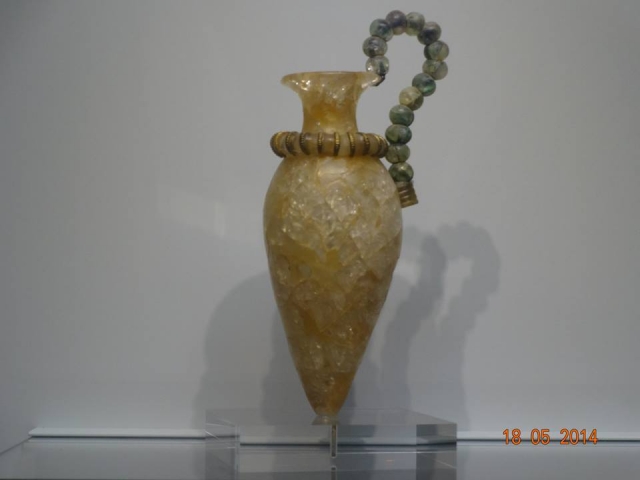 The Palace of Kato Zakros is located 26 kms south of Palekastro. Its position shelters it from the dangerously strong north winds that pass Cape Sidero on the north-east tip of Crete.

It was the last of the major palaces to be discovered and is smaller than the other three at Knossos, Malia and Phaistos. The original excavations were begun by D.G. Howarth of the British School of Archaeology in Athens, and 12 houses in the town surrounding the Palace, whose existence remained unknown, were unearthed before the excavation was abandoned.

Nikolaos Platon resumed the excavation in 1961 and was able to unearth a palace which had not been looted at the time of its destruction. The excavations have continued until the present day. The excavation represents one of the most important for Minoan archaeology since the Second World War, and the lateness of its discovery allowed it to be excavated using more modern and more scientific methods than those adopted in the excavation of the other Palaces some 60 years earlier.

The Palace of Zakros probably acted as the Minoan gateway to the east and this view is supported by various movable finds on the site which had come from the Middle East. Like the other palaces, Zakros was rebuilt after the earthquake destruction of the old palaces. The second palace was built around 1600 BC and finally destroyed around 1450 BC, along with other centres of Minoan civilisation in Crete.

Fortunately many artefacts were left in situ, probably due to the suddenness of the destruction. The palace covered 8,000 square metres, contained 150 rooms and had a Central Court measuring about 30 metres by 12 metres, smaller than that of Knossos. 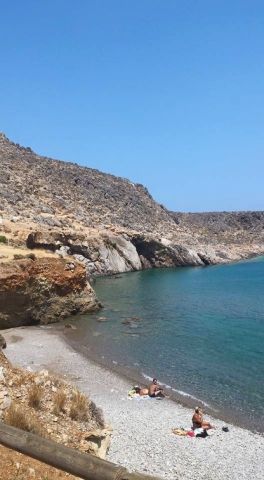